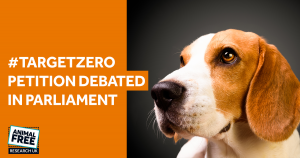 October 25th marked a significant event for animals in laboratories, as two high-profile petitions about animal experiments were debated in Parliament.

One of these resulted from the #TargetZero campaign, which is a collaboration between Animal Free Research UK, Cruelty Free International and OneKind. This bold initiative calls on the Government to produce a concrete plan for phasing out animal experiments once and for all.

We were encouraged by strong calls during the debate for a kinder and more modern approach to research. We were also pleased to see work that we have championed reflected in the contributions, such as highlighting the economic potential of animal free techniques and calling for medical research to be modernised.

It was highly encouraging to see this critical issue represented in Parliament, since it has too often been absent from discussions in Westminster about animal welfare. Earlier this year, the Government published its Action Plan for Animal Welfare, but animals in laboratories were given just one sentence, which committed to maintaining the status quo. For the millions of animals used in experiments, and the countless patients waiting for medical progress, the status quo is simply not good enough.

The debate was brought about by many thousands of compassionate people taking the time to speak out for animals. Over 83,000 people had signed the #TargetZero petition by that point, and we are hugely grateful to all of you who signed and promoted it. We believe that the petition has a very good chance of reaching 100,000 signatures by its closing date of 7th January. As well as dedicated animal advocates, we know that the majority of the public is in favour of moving to a kinder and more progressive form of science. A February 2021 YouGov poll commissioned by Animal Free Research UK found that 70% of respondents support animal experiments in medical research being phased out by 2040.

While yesterday’s debate signalled important progress, it was marred by a great deal of sadness following recent events. The tragic death of Sir David Amess MP marked the loss of a dedicated and effective advocate for animals, who had served as the Vice-Chair of the All-Party Parliamentary Group on Human Relevant Science. Sir David would very likely have spoken at the debate and the event was a poignant reminder of this huge loss to both animals and people. Throughout the debate, there were numerous tributes to Sir David and his outstanding work to improve animal protection.

The debate saw compelling contributions from a wide range of MPs:

The discussion was followed by a response from the Minister for Science, Research and Innovation, George Freeman. This was comprehensive and contained some encouraging elements, but various points that were made deserve a response. Firstly, the scientific problems with animal experiments cannot be over-emphasised. The Minister argued that animal tests are needed to ensure that humans are not exposed to harm, but research shows that fundamental differences between species mean that animal experiments are not (and can never be) a reliable predictor of whether substances will be safe for people.[1] [2] This can be illustrated by a simple example – chocolate is poisonous to dogs and paracetamol to cats, yet both these substances are generally safe for people.

While the Minister mentioned that animals in laboratories are covered by a specific law – the Animals (Scientific Procedures) Act 1986 abbreviated to ASPA, this does not mean that they are somehow offered a better standard of protection. On the contrary, ASPA facilitates harms being caused to animals that would be illegal if inflicted on them in normal circumstances. Significant stress and distress are acknowledged as part and parcel of life in a laboratory for animals. Outside the suffering that is legally sanctioned though project licences, the Home Office’s own reports provide a chilling reminder of what animals can be subjected to due to negligence in labs. This has included incidents such as mice dying due to inadequate food and water provision and a cage of mice being accidentally placed into an autoclave, where they died.

The Minister emphasised the legal requirement that animals can only be used when there is no non-animal method available. Sadly, we do not believe that this requirement is being taken seriously. The non-technical summaries of licences granted during the first half of 2020 show many examples of researchers failing to engage meaningfully with the question about their strategy in searching for non-animal alternatives, with a one-word answer provided in one case. Following our concerns about this issue, Alex Sobel MP asked a written question which revealed that no applications for licences to conduct animal experiments were refused permission in 2020. In addition, Cruelty Free International have highlighted that tens of thousands of mice continue to be used in tests for botulinum products, despite a non-animal method being available.[3]

Finally, while the Minister pointed to funding provided for the National Centre for the Replacement, Refinement & Reduction of Animals in Research (NC3Rs), this should not be seen as synonymous with funding for animal free research. Since 2004, 16 per cent of the Centre’s grant funding has focused on refinement work, such as a project to develop ‘grimace scales’ to measure pain in animals used in experiments. A recent challenge project funded by the NC3Rs was to create virtual dog tissues and organs, which does not advance human relevant science.[4] Work of this kind does nothing to address the moral and scientific imperative of transforming medical research to replace animals with cutting-edge techniques. That is why Animal Free Research UK believes that the 3Rs framework, which is failing to bring about change, should be replaced with a bold new focus on modernising medical research to be animal free and human relevant. We provide a practical means of advancing this vision by funding scientists to develop these human relevant techniques.

We were, however, encouraged by the Minister’s support for animal free techniques, and his background in working within this field, having founded a company applying artificial intelligence to predicting the toxicity of substances. We believe that it would be of great interest to the Minister and his team to learn more about the work that Animal Free Research UK is funding, and to interact with the leading scientists who are undertaking this. We will also look forward to working with the Minister to discuss the concrete policy actions that would help to modernise medical research.

While the debate marked a key milestone, we are all too aware that we still have a very long way to go in achieving our vision of a world where human diseases are cured faster without animal suffering.

If you have not yet signed the petition, there is still time to do so, as we are keen to show that support for our case is continuing to grow, and gaining a high number of signatures in your area will be especially helpful in enabling us to engage with your local MP.

In addition, we would ask you to take a moment to complete our new online action, urging your MP to speak out in favour of animal free research techniques, and highlighting the economic potential these offer.

We count on your continued support and look forward to working with you on this important issue. Together we can capture the momentum from the debate and use it to accelerate progress towards achieving a brighter future for animals and people.

[3] Cruelty Free International – much more needs to be done