Supervised by Dr Sebastien Farnaud at Coventry University, Abigail will develop and validate an all-human model of Parkinson’s disease to replace experiments on mice, rats, dogs and monkeys. 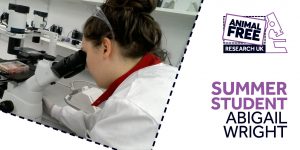 The primary symptoms of Parkinson’s disease, including muscle rigidity, tremor and slowing of physical movement, are thought to be the result of a deficiency in dopamine – one of the brain’s chemical messengers. The cause of Parkinson’s disease is still unknown, so it is often treated by restoring dopamine levels in patients, which can alleviate the symptoms of the disease – but not what causes it. However, people with Parkinson’s disease often have increased levels of iron in their brain, which might play a role in causing less dopamine to be produced.

Parkinson’s disease does not develop naturally in any animals except humans. However, monkeys, rats, mice, dogs, cats and pigs have all, unfortunately, been experimented on in an attempt to study the disease. Animals are kept in cages and repeatedly injected with chemicals to force them to suffer with the symptoms of Parkinson’s disease. They can experience seizures, limb paralysis, tremors, collapsing and even death, before being forced into various machines and instruments to be experimented on. Animals who don’t die as a result of being drugged are killed and punctured in their hearts to flush the blood out of their bodies before their brains are removed for further dissection.

Research is imperative to the development of the biomedical field. It allows knowledge and understanding of disease – permitting advances in diagnosis, prognosis and treatment of disease cause and its induced symptoms. As a future biomedical scientist, my summer research project will help me strive for animal free research. The development of an all-human model could provide a humane and valid animal-replacement model for studying Parkinson’s disease.