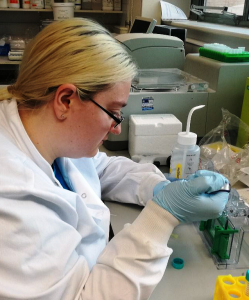 Parkinson’s disease is a complex and debilitating disorder that affects more than 127,000 people in the UK. It is a consequence of the progressive death of specific brain cells within the brain region that controls movement. What causes these brain cells to die is not known but is linked to the impairment of a number of biological processes.

Lauren, supervised by Dr Luigi De Girolamo at Nottingham Trent University, used an advanced human-cell model to identify a ‘biological fingerprint’ of Parkinson’s disease, which could be used to test the potential of new treatments.

Lauren mimicked the Parkinson’s disease process in a human-cell model to assess the biological factors (proteins) that are linked to the death of brain cells in a patient with Parkinson’s disease. Her work identified that you can directly replace the use of animal derived biomaterials traditionally used for this purpose with animal free materials.

The results of her work could help identify individuals at risk of Parkinson’s disease, be used to monitor disease progression and see how the disease responds to new treatments, all without using animals.

“The Summer Studentship Scheme gave me a taste for research and greatly improved my confidence! I was able to learn and improve a range of skills, and it was nice to feel that the work I was doing was supporting a good cause.” – Lauren Richardson