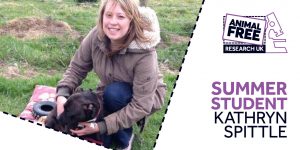 Microbial resistance to antibiotics is a major problem for patients suffering with microbial infections. Some microbes, such as bacteria, can produce an enzyme called ß-Lactamase, which breaks down penicillin and other antibiotics, making the bacteria resistant to current antibiotic treatments. The presence of certain bacteria in patients may also be a marker of Alzheimer’s disease. The measurement of ß-Lactamase in both microbial infections and Alzheimer’s disease therefore has the potential to help medical professionals identify, monitor and treat these diseases.

The current measurement of ß-Lactamase uses antibodies, which are small biological molecules that can detect other specific molecules in the body. Unfortunately, millions of animals worldwide – including hamsters, guinea pigs, rabbits, goats, sheep, horses, mice and rats – are forced to produce antibodies, which are then extracted from their bodies by inserting a needle directly into their heart as it is beating, to remove as much blood as possible from their body. When no more blood can be extracted, the animals are killed.

In her summer studentship, Kathryn will generate synthetic compounds, called aptamers, that can be used to measure ß-Lactamase in patient samples without experimenting on animals. Kathryn’s new method to measure ß-Lactamase using animal free, synthetic antibodies could help to evaluate the true potential of detecting this enzyme in patients with microbial infections and Alzheimer’s disease. Her research will also promote the use of cheap non-animal antibody replacements, which could totally replace antibody production in animals if universally adopted and help to convince other researchers of their potential.

Finding a replacement for animal experiments is important to me due to my deep empathy for animals. My summer research project is the best starting point to be able to move forward with my education and career in a cruelty-free way. Most people pursue a career in science to help other people, my aim is to help those that cannot help themselves – animals. I believe we can strive for the complete replacement of animals in the laboratory and use science to help animals rather than harm them.

A lack of confidence, as well as ignorance, can stand in the way of a new scientist feeling able to question methods that experiment on animals. I feel that my summer research project will break down these barriers and introduce a new-found confidence for me to question such methods, teaching me to stand up for animal rights in the laboratory.