Supervised by Dr Rosemary Bamford at the University of Exeter, Josan will edit human cells to understand the role of genes in autism and 3p deletion syndrome to help replace experiments on mice and rats. 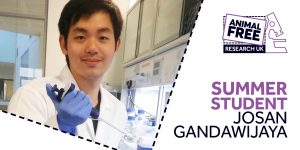 Autism spectrum disorder is one of the most common disorders that affects development of the nervous system and brain. However, little is known about the specific underlying cause of autism symptoms, such as problems with social interaction and communication. Autism spectrum disorder is also one of the symptoms of 3p deletion syndrome, a condition that can also cause developmental delays, slow growth and learning disability.

People with 3p deletion syndrome have a rare deletion of a specific section of DNA in their genes (genes act as instructions that tell the cell how to behave and are made up of sections of DNA). Unfortunately, animals are often genetically modified, bred and cruelly killed to study the effects of genetic and developmental disorders. However, experimenting on genetically modified animals is not directly translatable to human disease because attempting to make animals more human-like does not make them human.

In his summer research project, Josan will generate human cells which have three genes missing, in order to mimic 3p deletion syndrome and understand the consequences of DNA deletion without experimenting on animals. To do this, Josan will edit the DNA in a human cell by using a new technology called CRISPR-Cas9 and then study the consequences of this DNA disruption on not only cell shape, growth and lifespan, but also its effect on other genes.

Josan’s research will lead to a clearer understanding of the role of genes in a particular area of DNA and their influence in 3p deletion syndrome and autism spectrum disorder. Ultimately, his work could help lead to the development of novel treatments for 3p deletion syndrome and also set a precedent for future gene studies using reproducible human cells, replacing experiments on genetically modified mice and rats.

My summer research project is the perfect opportunity for me to not only participate in neuroscience research, but also jump into the field of genetics by learning about novel gene-editing technologies. I hope to design better disease models through genetically-modified human cells or organoid models that would more appropriately represent human biology, as the disconnect between the anatomy and physiology of humans and other animal species warrants the development of more appropriate models of human diseases.

The Animal Free Research UK Summer Student Programme will be a stepping stone towards my aspirations for becoming an academic researcher. It will give me the opportunity to experience a professional laboratory environment, allowing me to build connections and practice organisational and collaborative skills as I work with other group members. The various cutting-edge techniques that I will learn through the Summer Student Programme will also make me a competitive candidate as I continue my studies after graduation at a postgraduate level.