Supervised by Dr Michelle Botha at University of Hertfordshire, James will develop a computational model to predict the psychoactivity of molecules affecting the central nervous system and help replace experiments on mice, rats, cats and monkeys. 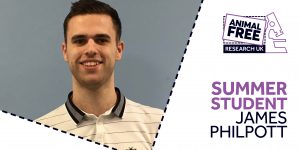 New psychoactive substances are drugs designed to mimic the effect of illegal recreational drugs such as cocaine, cannabis and ecstasy. Health-related issues regarding these drugs is a serious concern as their effects vary greatly and there is relatively little information about the pharmacological effects these drugs have on the body.

Unfortunately, a devastating number of animals are killed annually to identify the psychoactive properties of new chemicals. Cats, monkeys, mice, rats and even spiders have been experimented on to study the effects of cocaine, LSD, caffeine and new psychoactive substances. Animals are injected or forced to consume drugs and then watched to see how they reacts in various situations that can cause severe pain, suffering or distress, including being stunned with electric shocks or forced to swim in a large beaker of water.

In his innovative summer research project, James will use develop mathematical equations to predict if a molecule could be psychoactive. He will use the chemical structures of known psychoactive substances to build computational models that can indicate whether a molecule has the ability to affect the central nervous system and cause psychoactivity.

James’s computational model could be applied to quickly and cheaply predict the pyschoactivity of millions of novel compounds. His research therefore has the potential to help replace animal experiments in the preliminary stages of drug design and speed up the drug-discovery process. It could also be used to help doctors and law enforcement agencies reduce the public health risk of psychoactive drugs.

I believe that it is vitally important that we move away from experiments on animals and strive towards finding viable alternatives in the evaluation of new drugs. We already have sophisticated computational methods that can be conducted on a computer to screen the effect of certain drugs on different receptors instead of the unnecessary battery farming and killing of animals. This summer research project will help kickstart my career as an animal free researcher by allowing me to develop a further understanding of the processes used in computational research. I hope to secure a career in this area as I firmly believe that research can be conducted without the needless death of animals.