Supervised by Dr Laura Urbano at the University of Hertfordshire, Intisar will develop a non-invasive tool for detecting, monitoring and treating cancer, to help replace experiments on mice and other animals worldwide used to produce antibodies. 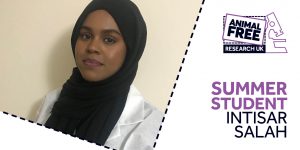 Sadly, one in two people in the UK will be diagnosed with cancer in their lifetime. Unfortunately, finding ways to detect, monitor and treat cancer often involves cruel experiments on mice, which aren’t relevant to humans.

Mice can be injected with chemicals to force tumour growth, have human tumours transplanted into them and be genetically modified so that they develop tumours more quickly. They are then killed at various stages of cancer growth so that researchers can study the evolution of their cancer. Unsurprisingly, the results of these cruel animal experiments are difficult to translate into humans.

The identification of cancerous tumours in patients is also often conducted using antibodies – small biological molecules that can detect target molecules in the body. Sadly, millions of animals worldwide – including hamsters, guinea pigs, rabbits, goats, sheep, horses, mice and rats – are all forced to produce antibodies, which are then extracted from them by repeatedly draining their blood.

In her summer research project, Intisar will create tiny particles, called fluorescent nanoparticles, which can detect and monitor cancerous tumours without using animals to produce them. Her research will also be able to identify where tumours are located in the body without patients undergoing surgery, because the nanoparticles accumulate in tumours and glow when a specific colour light is shined onto them. Her fluorescent nanoparticles could also be loaded with drugs to selectively deliver them to diseased areas within the body, thereby starting cancer therapy straight away and avoiding damage to healthy tissues.

Intisar’s research could help provide powerful new tools for cancer diagnosis and therapy, giving cancer patients a better prognosis and improved quality of life. Her research could also help replace the millions of animals experimented on every year to study cancer and produce antibodies.

The use of animals in medical research has always troubled me, and this has significantly influenced my past career choices. I strongly believe it is unnecessary and unjustified to subject powerless animals to painful experiments and expose them to stressful environments for biomedical research, sometimes with devastating outcomes. This multidisciplinary project and the additional training provided by the Animal Free Research UK Summer School will allow me to kickstart my research career by developing my research, laboratory, critical thinking, problem solving and networking skills.