Supervised by Dr Michael Cook at the University of Hertfordshire, Faris will develop a novel detection method to replace antibodies in the diagnostic testing of HIV and help replace experiments on millions of animals worldwide – including hamsters, guinea pigs, rabbits, goats, sheep, horses, mice and rats. 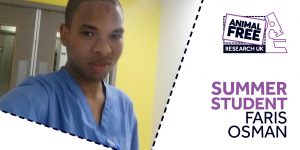 There are estimated to be 37 million people living with HIV worldwide. HIV weakens the body’s defence system so that it can’t fight off infections. It’s extremely important that people are diagnosed with HIV soon after being infected, so that they can receive life-saving treatment.

The identification of viruses such as HIV in patients is often conducted using antibodies – small biological molecules that can detect target molecules in the body. Unfortunately, millions of animals worldwide – including hamsters, guinea pigs, rabbits, goats, sheep, horses, mice and rats – are all cruelly used as antibody production factories. These animals are painfully injected with a specific molecule that forces them to start producing antibodies, which are then extracted from them by repeatedly draining their blood. After suffering through months of this, the animals are all eventually killed. A puncture to their beating hearts makes sure that every last drop of their blood is extracted for antibody isolation.

In his summer project, Faris will investigate using an entirely synthetic antibody that can detect the HIV virus immediately, by turning from a solution into a gel. His project could lead to a completely animal-free diagnostic test for HIV that is cheaper, faster, more stable and far less cruel than using antibodies extracted from animals.

The gel detection method Faris aims to produce will not require any specialist equipment or knowledge to perform, which could make the diagnosis of HIV more accessible for millions of people. It also has the potential to help replace the use of animal-derived antibodies in identifying a wide range of other diseases.

I am very passionate about animals and their welfare. In my summer research project, I hope to make a contribution in finding an alternative way to do research, without the involvement and suffering of live animals. My summer research project will help me learn more about this area and teach me invaluable research skills, which will enable me in the future to continue this great work.