Baransel Kamaz undertook a Summer Studentship in 2014 to directly study human liver cancer using human-derived cells, under the supervision of Dr. Meritxell Huch at the University of Cambridge. They hope that the results will replace experiments on rats.

How does our research help humans?

Failure in the management of liver cancer treatment is due, in part, to our lack of understanding of the disease mechanisms as much as to the broad spectrum of responses that patients have to treatment. Establishing liver organoids from liver cancer patients will open up the opportunity to treat liver cancer in a more patient-specific manner. In that regard, human liver organoid cultures derived from cancer patients allow preservation of human genetic variability in vitro, a complexity that cannot be represented in animal models or in classical 2D-cell cultures. Building on current organoid culture methodology, Kamaz aimed to establish liver cancer organoid models carrying cancer mutations in five different genes.

Why did we fund this human-relevant animal-free research?

Lack of suitable human culture systems that faithfully represent the corresponding functional human adult tissues hampers the advance of our understanding of human biology and disease. Consequently, it has resulted in extensive use of animal models in order to study gene functions in normal physiology, disease and cancer. The development of appropriate in vitro systems and the accompanying tools for gene manipulation is therefore an important step towards increasing our knowledge of human diseases and finding suitable therapeutic approaches. At the same time, it will allow for the replacement of animal use in these fields. 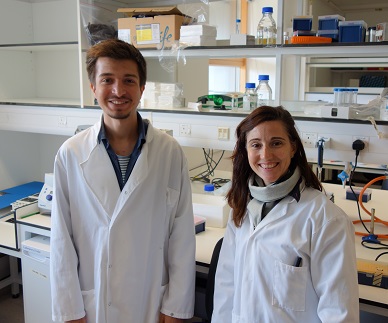 Do we know how many animals are typically used in this type of research?

To study cancer mutations in five different genes using mouse models would require five different mutant lines to be bred. Dr. Huch estimates that one mutant line project, bred over a period of three years (15 generations), would need an estimated 1500 mice. To study the same cancer mutations in their liver organoid model would therefore replace 7500 mice, with an economic impact of approximately £150,000 (1500 cages with 5 mice per cage x 10 weeks x £10 per cage per week).

Furthermore, in the liver cancer field Dr. Huch estimates that a minimum of 16,640 animals were used in the period of her PubMed literature survey (1st January 2012 to 1st February 2014), with approximately 1280 of these animals used in the UK. (Figures were calculated according to a minimum average use of 20 animals per project/paper.) All of these animals could potentially be replaced with an in vitro 3D culture system that faithfully mimics all stages of liver stem cell-niche cell interaction and liver pathology. In addition, when new organoid cultures derived from different organs become available, the knowledge acquired from this project could be readily applied to the study of other organ systems, thus, reducing the animal numbers used in other fields by replacing their model systems with organoid cultures.

With the human liver cancer culture system developed by Dr. Huch, the team established patient-based hepatocellular carcinoma (liver cancer) organoids that were genetically stable, even after long term expansion. Histological characterisation, gene expression analysis and DNA sequencing results confirmed that the organoids also mimicked human liver cancer in great agreement. These findings hold the potential to improve our progress on liver cancer treatment as well as our knowledge about liver cancer itself. 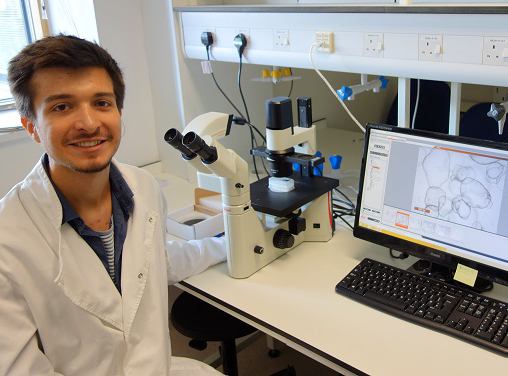 Baransel Kamaz in the laboratory

Baransel adds, “Before this studentship, I was aware of benefits of non-animal research. I had an ethical concern about using animals for research and I thought about if the results that we gained from animal research represent human or not. But I wasn’t fully aware of potential methods to replace animal experiments. This summer studentships helped me to be aware of new techniques to reach more representative results in medical research.”

During his Summer Studentship, Baransel gained lots of laboratory skills that would not otherwise be available to him as an international student. His experience has guided his career intentions, as he now wants to further his research career with a PhD in cancer research and ultimately work as a pediatric oncologist.