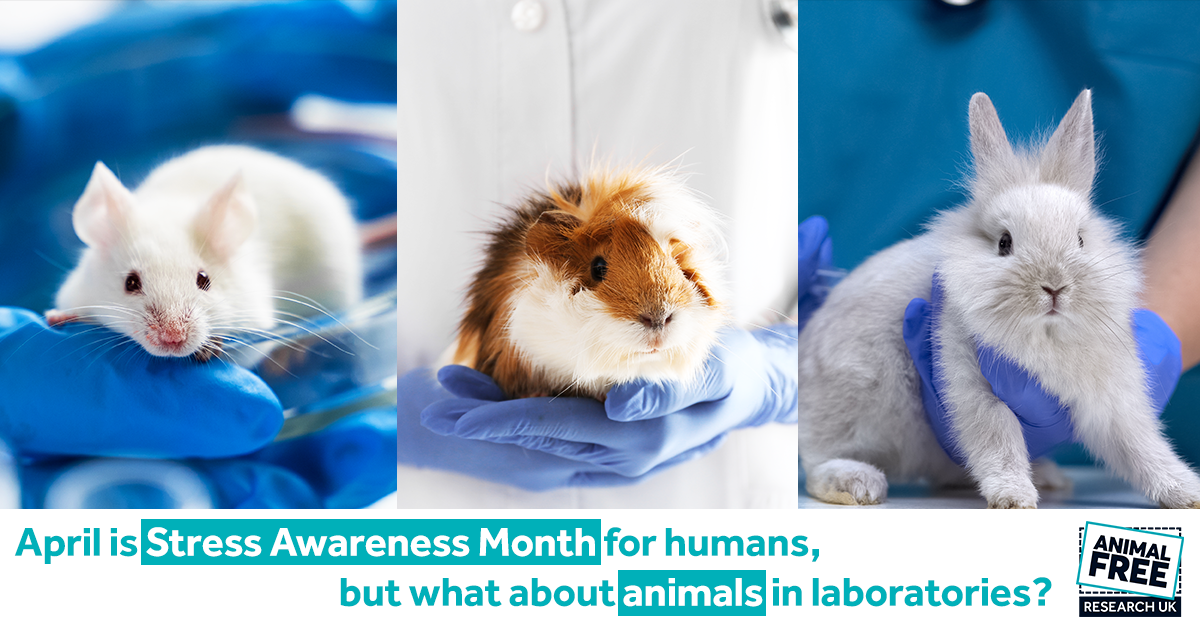 Stress Awareness Month for humans, but what about animals in laboratories?

Stress Awareness Month for humans, but what about animals in laboratories?

Few deny life in the 21st Century is stressful for humans so Stress Awareness Month, which falls every April, is a welcome diary date to reconnect with ourselves and regain certainty and control – but what about animals in laboratories?

Stress has been forced upon them for at least two millennia by humans (Hippocrates is among the first) practicing animal research – but yet where is the date in the diary to highlight and address their suffering?

It does not take much for the imagination to understand the plight of the millions of animals suffering in laboratories across the world. Life for them is one where all control has been denied – and that’s before experiments begin; the laboratory environment deprives them of the very basics required for physical and mental well-being.

Their distress has been documented and investigated, and it is accepted without question that they suffer from depression, anxiety, their physiological responses severely altered to the point of harming the individual.

Published earlier this year, a review of 200 scientific studies using rats and mice made the headlines in Canada’s The Globe and Mail, which records six million readers weekly, and widely circulated on social media in scientific circles. Led by scientists at the University of Guelph in Canada, researchers concluded that “conventional housing” of rats and mice in labs—consisting of small, barren cages or Perspex boxes— ”appears sufficiently distressing to compromise their health.”

They also stated that their findings added to previous work showing that “mice and rats used in research are typically exposed to CRAMPED”, an acronym for cold, rotund, abnormal, male-biased, poorly surviving, enclosed and distressed. This, concluded the researchers, raised “serious questions about the validity and generalisability of the data they generate.”

The psychological and physiological damage is a serious welfare issue and that alone should result in an immediate end to animal-based experiments. This had been known for decades. Yet here once again, in black and white, the report concluded beyond doubt that the stress put upon animals so affects their immune function, inflammatory responses, metabolism, diseases susceptibility and progression, and more besides, renders the reliability of any experimental results obtained null and void.

Add this to known biological differences between our species and the applicability of animal-based experiments to human health is nothing short of dangerous. Yet for some among our science community, their only response seems to be to do more experiments on animals in laboratories to find out their stress levels.

It begs the question: just how large does the already huge amount of evidence generated need to be for everyone to look at the facts and agree to stop animal experiments – how much research do we need on this?

What is clear is current regulations governing such studies into the stress of animals in laboratories clearly do not ask enough or the right questions, like do we need to know what this research will find out? Do we know it already? Is it relevant to humans? Is it even relevant to the same types of animals who aren’t in laboratories?

These questions need to be asked. Of course, what should be taking place in the 21st Century with modern medical research methods readily available, is for scientists to stick to human-relevant research that benefits all – humans and animals.

Thankfully, attitudes and policy are shifting among our parliamentary law makers here in the UK and elsewhere. We and our partners lobby hard every day on behalf of our supporters to bring Britain and the world not only to their animal welfare senses, but also to understand how the new age of modern medical research has rendered animal-based research redundant.

During April’s Stress Awareness Month, we should be minded to highlight the affect stress has on animals in laboratories as well as on us. By drawing parallels between human and animals during April, we have an opportunity to raise further the public consciousness and incite action.