Understanding the spread of cancer

At our Animal Replacement Centre of Excellence (ARC 1.0) in London, Dr Adrian Biddle and his team are embarking on a project to develop reliable animal free methods to understand how tumour cells spread and invade other organs of the human body (known as metastasis).

Cancer is, during this century, expected to be the leading cause of death and the most significant obstacle to increasing life expectancy in every country in the world.

Approximately 90% of cancer-related deaths are not associated with primary tumours but with secondary tumours resulting from the spread of cancer cells throughout the body. This is called the metastatic process – which is still poorly understood, mainly because researchers have difficulty modelling it in lab environments.

Over the last few years there have been over 800 academic publications reporting the use of mice in experiments for the study of with the use of around 50 mice per study. The number of such studies has increased 114% over the last 5 years and continues to increase year on year.

So, by 2025, we expect that the number of mice involved in these academic experiments alone will rise above 25,000 per year unless alternatives are developed. These numbers make for alarming reading and raise a lot of ethical concern, especially knowing that more than 95% of cancer drugs that show promise in animal testing, fail in phase 1 clinical trials in humans, proving that current models of cancer metastasis are inadequate.

As tumour cells spread around the human body, they must learn how to survive and grow in new environments that they have not encountered before. If we can understand the factors that enable them to do this, we can develop new drugs that interfere with these factors and prevent metastasis (tumour growth at secondary sites). Tumours behave very differently between patients, but the tissue environment is much more consistent and thus a very promising potential drug target.

Most metastasis modelling uses large numbers of mice – even though a mouse is very different from a human, so it is therefore important to understand how this process works in humans.

Imaging from a metastatic tumour 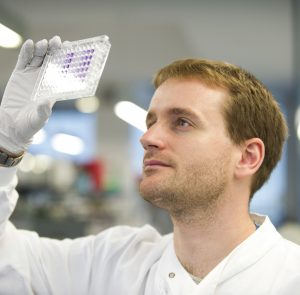 To do this, at the Animal Replacement Centre of Excellence (ARC 1.0) in London, Adrian will build a mathematical model based on current understanding of the complex factors at interplay in this system and use this to predict which factors are likely to be most important. He will then test these factors using 3D metastasis models and a new Artificial Intelligence tool in order to ascertain their effect on cancer cell survival and growth within this environment.

The 3D metastasis models can grow small human tumours which mimic the way cells move out of the tumour and metastasize. They contain hydrogels, which are highly absorbent yet maintain well defined structures. 3D hydrogel models are well established in Adrian’s lab and the team have extensive experience with performing mathematical modelling techniques.

The long-term outcome of this project is to, through further development of the model and engagement with Industry, develop an accurate human relevant model of the entire metastatic process which will replace the large number of mice used every year.

The word pioneering is overly used but there is no denying Adrian’s work really is revolutionary, making the case for ending animals in this area of research difficult to ignore.

How you can help

Adrian’s research will hasten the discovery of effective drugs and help end the suffering of animals in laboratories. A real win-win.

This innovative three-year project requires only £50,000 in funding. With your support of as little as £15, the project will not only help beat cancer, but also save countless animals from suffering in research every year.

Can we count on your generous and unswerving support once more with a donation today to fund this life saving project?