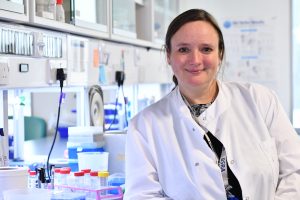 Professor Lorna Harries at the University of Exeter, is using human relevant approaches to study diabetes-related chronic kidney disease. This research could pave the way for the development of a new drug to treat the disease, removing the need for dialysis or kidney transplantation and saving millions of lives.

“In this work we hope to understand how changes to the expression of the gene we have discovered can impact the behaviour of the cells that can lead to diabetes-related kidney disease, and to see if correcting its expression can reverse these changes. We hope that as well as providing some answers towards a treatment for this devastating condition, our research will provide humanised cell systems that other researchers can use to research diabetic kidney disease, which will negate the need for animal research.” – Professor Lorna Harries

Diabetes is a lifelong condition that causes a person’s blood sugar level to become too high, resulting in a number of complications including eye, nerve, kidney and heart problems. There are 2 main types of diabetes – type 1, where the body’s immune system attacks and destroys the cells that produce insulin and type 2, where the body does not produce enough insulin, or its cells do not react to it. Type 2 is more common, affecting around 90% of all UK adults with diabetes.

Chronic kidney disease (CKD) is an incurable condition that causes the most diabetes-related deaths. It affects a third of people with type 1 diabetes and half of people with type 2 diabetes. CKD has several causes, but end-stage CKD, often followed by kidney failure, is usually always caused by fibrosis, which is where tubes within the kidney become scarred, stopping them from working properly. Fibrosis can happen when kidney cells called renal tubular epithelial cells, change identity, and turn into cells known as myofibroblasts. These cells release proteins that re-model the surrounding environment and cause it to become fibrotic. 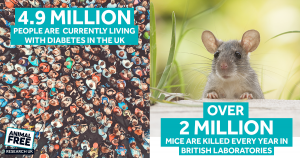 Kidney disease can be induced indirectly by making animals diabetic through a high fat diet, or by altering their genes to make them more susceptible to the disease. Direct kidney damage can be induced through surgery to block blood flow within the kidney or by triggering kidney disease using chemicals. Huge numbers of animals are used in diabetes research but key biological differences between humans and animals means that findings from animal tests are often not translatable to humans and potential therapeutic targets are being missed. Specific proteins can impact kidney cell identity, form, and behaviour in very different ways in animals compared with humans.

Professor Lorna Harries, and her team at the University of Exeter’s Animal Replacement Centre of Excellence (ARC 2.0), have previously identified a faulty gene in pancreatic tissue, which causes cells to change form. Changes in this gene that alter its function and the proteins it codes for, can also be observed in diabetes so this gene may be a potential therapeutic target.

Professor Harries is culturing (growing) human renal tubular epithelial cells in the lab to uncover how the diabetic environment may be impacting the way this gene works and how the cells are triggered into changing into damaging myofibroblasts. She’s using a genetic engineering approach to alter the faulty gene and restore its healthy function. This could stop or reverse renal tubular epithelial cells changing into myofibroblasts during chronic kidney disease, thereby halting fibrosis.

This therapeutic target could pave a path towards the development of a new drug for chronic kidney disease, halting or preventing fibrosis and removing the need for dialysis or kidney transplantation, saving millions of lives. Professor Harries aims to make her animal free tissue culture methods freely available to other researchers as well as promoting the possibilities around identifying new drug targets and evaluating them without the need for any animal experimentation.