Professor Chris Denning and his team at the University of Nottingham are working to develop cutting edge human stem cell models, deepening our understanding of cardiac fibrosis – a prevailing cause of heart failure in the UK.

How does our research help humans and animals? 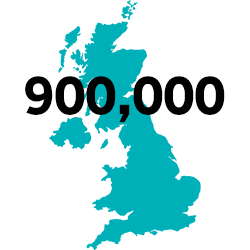 The number of people living with heart failure in the UK

A key cause of heart failure is cardiac fibrosis (thickening of the heart tissue). It is hard to treat, and the need to urgently tackle cardiac fibrosis is now well-recognised by clinicians, academics, industry, and biotech companies internationally.

More than 900,000 people are currently living with heart failure in the UK.

Animal research has been poor predictors of cardiac fibrosis in humans – and despite huge scientific investment in animal-based research, there still is no effective treatment for the condition.

Just because different animals share a broad category, such as being a ‘mammal’, does not mean the genetics and physiology are the same.

For example, the heart of a mouse works at 500 beats per minute relative to 60-80 beats per minute for humans. This means the mechanisms to regulate electrical activity and contraction are very different between these species. Testing whether drugs can mend a broken mouse heart is therefore a flawed approach and not a single drug shown to rescue heart failure in mice has translated into clinical use.

A more sophisticated ‘all human’ cell-based model is needed, wherein all key aspects can be regulated and refined to accurately mimic the disease.

Funded by Animal Free Research UK, the ‘Mini Hearts’ Research Project looks to deepen our understanding of cardiac fibrosis by using human stem cell models to support drug discovery, which could one day lead to ways to treat and help protect patients

This project will explore pioneering human relevant research techniques to speed up the discovery of treatments for this widespread problem, which touches the lives of so many.

At the Biodiscovery Institute, the team combine several remarkable technologies to understand why the heart goes wrong, how genetics and drugs interplay, and what we can do to fix these problems.

The first technology is called ‘human induced pluripotent stem cells’ or hiPSCs for short. For this project, a small piece of skin, about the size of the head of a matchstick, is donated by a patient with heart disease. These cells can then be reprogrammed and coaxed into becoming heart cells with the same mutations the patient has.

The second technology is called gene editing, which allows them to change the DNA sequence with precision. They can remove or introduce damaging mutations in the hiPSCs, then turn them into heart cells and ask what impact this has on heart function. For example, how do healthy versus diseased heart cells behave to different drugs? Does this influence who might be able to take the drugs?

By combining these two technologies, Chris and his multidisciplinary team at the University of Nottingham are investing drug-cell interactions and how heart disease alters the way different heart cells respond to each other. This is particularly important for cardiac fibrosis, which significantly increases the likelihood of heart failure.

The project will deliver a highly defined, human-relevant, reproducible, and controllable model – a model that will better serve cardiac research and would save the lives of hundreds of thousands of animals and people.

Chris and his team hope it will lead to drug development and testing. While developing this model, they will work closely with Dave Smith of AstraZeneca to understand appropriate routes to drug discovery.

How you can help

Projects like these are the real hope to save humans and animals – and prove our scientists are true pioneers in animal free research. Their achievements are also those of committed supporters like you who are helping to prove that animal free research is the gold standard.

Our projects will change the way many scientists and researchers regard using animals – and herald a new age of humane research.
Donate today and show the scientific world the way forward.