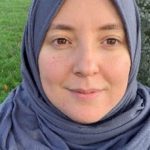 Professor Adam Perriman and Dr Asme Boussahel at the University of Bristol are developing a tissue-on-a-chip device that will mimic the composition and function of skin tissue. This could replace animals used for testing injected drugs and lead to more efficient, reliable and safer treatments for people.

The role of subcutaneous tissue in drug absorption

Drugs such as insulin are often best delivered to the body by injection into the subcutaneous tissue, which is the layer of fatty tissue that sits below the upper skin layers. The advantage of subcutaneous injections over injections directly into the blood, is that patients can self-administer these drugs, reducing discomfort. The amount and speed at which drugs are then absorbed into the blood is controlled by the structure and composition of the subcutaneous tissue. Determining drug absorption is important during the drug’s development, as it ensures that patients receive the most effective and safe dose of the drug.

Dr Asme Boussahel, at the University of Bristol, is a research fellow working with Professor Adam Perriman. She’s developing a tissue-on-a-chip device which will mimic the composition and function of the subcutaneous tissue in controlling drug absorption. This novel organ-on-a-chip will reflect the intricacies of blood flow and fluid movement within the subcutaneous tissue and enable Dr Boussahel to study drug absorption.

To re-create the subcutaneous tissue, Dr Boussahel is using hydrogel. This is a material that can absorb substances (such as cells) and maintain a defined shape and is commonly used for producing contact lenses and wound dressings. She’s introducing cells called adipocytes (fat cells) and macrophages (immune cells) which are thought to play a significant role in drug absorption by interacting with drugs or degrading them. Fluids will also be incorporated into the 3D model to better reflect natural subcutaneous tissue. Dr Bouhassel aims to study how adipocytes and macrophages interact with each other, with drugs, and how these interactions impact drug absorption.

The structure of human skin. The epidermis and dermis form the upper layers of skin. The subcutaneous tissue (also known as the hypodermis) is the fat layer below the skin. Drug absorption from the fat rich subcutaneous tissue occurs through either capillaries (red) or lymphatic vessels (green)

Dr Bouhassel plans to optimise the model so that it can be used to test as many drugs as quickly possible and it is fit for purpose for industrial use. She will validate her model by comparing the results of drug absorption tests using her model to those that have come from human datasets held by pharmaceutical companies. Dr Bouhassel will also try to engage with regulatory approval agencies to determine how the model can be approved for use in the drug development process.

Pharmaceutical companies developing drugs for injection into the subcutaneous tissue rely heavily on animal testing to determine absorption rates. They first assess different species to find which are most appropriate for the drug tests and then carry out several rounds of animal experiments to test different recipes of the drug. Predicting human drug absorption using animals is not only unethical but costly, time consuming, and inefficient due to differences in the subcutaneous tissue in humans and animals. And around 92% of drugs that show promise in animal experiments fail to translate to benefits for people.

This pioneering model of the human subcutaneous tissue will offer a unique solution that replaces animals used for the development of subcutaneously injected drugs. This will lead to more efficient, reliable and safer treatments, considerably improving patients’ health whilst saving animals’ lives.