“I am really grateful to Animal Free Research UK for this funding. The ultimate goal of my research is to be able to replace animal testing in lung cancer research one day. I believe this can bring much benefit to the patients in the future, in terms of availability of both more effective treatments and more predictive diagnostics. This funding will allow me to move one step closer to my goal, by supporting the development of a lung cancer-in-a-dish model, completely devoid of animal-derived biomaterials, that can be used for understanding how to monitor acquired resistance in real-time in lung cancer patients.” – Dr Dania Movia

Lung cancer is one of the most common types of cancer, claiming the lives of almost 1.7 million people worldwide and almost 35,000 people in the UK. Treatment is sometimes too late as symptoms are often unnoticeable until the disease has spread through the lungs or into other parts of the body, and so the outlook is often poorer than for other cancers. Lung cancer survival hasn’t improved much in the last 40 years, with only around one in ten people surviving for more than ten years after being diagnosed. 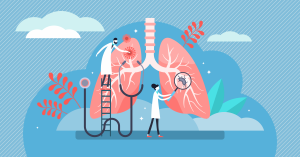 Lung cancer is one of the most common types of cancer, claiming the lives of almost 1.7 million people worldwide

Treating the cancer early, before it has spread, can have a marked improvement on the outlook for patients. Some new and promising treatments for lung cancer have recently been developed, targeting important tumour molecules to shrink the tumour or kill the cancer cells. Whilst these drugs can initially work well, tumours sometimes subsequently become ‘resistant’ to the drug, stopping it from working, so we need to address this issue to find better drugs which will effectively combat the cancer.

Experimenting on animals has been the ‘gold standard’ way of studying lung cancer, but these findings rarely translate into clinical benefits for people. This is due to fundamental biological differences between humans and animals, resulting in the misunderstanding of crucial knowledge about how the disease develops, how resistance happens and missing potential drug targets.

More humane and human-relevant ways of studying drug resistance are urgently needed if we are going to improve lung cancer survival.

The role of extracellular vesicles in lung cancer drug resistance 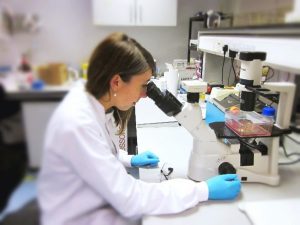 Dr Dania Movia, at Trinity College Dublin, is looking at how particles called ‘extracellular vesicles’ could lead to drug resistance in non-small-cell lung cancer (NSCLC), the most common type of lung cancer.

Extracellular vesicles are small, cargo-carrying particles that are released from cells. Their cargo can include genetic material (for example DNA), proteins, or chemicals important in cell communication. Some vesicles that tumours release can alter the composition of the environment that surrounds the cancer cells (known as the tumour microenvironment) in such a way that it helps the cancer to thrive. This could be for example, by suppressing or killing immune cells, rendering them unable to effectively fight the cancer or by remodelling the tumour environment, making it easier for cancer cells to move and spread.

Extracellular vesicles can even prime the microenvironment of a distant, healthy organ so that it becomes suitable for metastatic (spreading) cancer cells to colonise it.

To assess and monitor if a tumour is becoming resistant to a drug, doctors currently take blood or tissue samples to analyse cancer cell’s DNA. This approach is costly and time consuming, and not suitable for screening large numbers of people, as analysis needs to take place within specialist labs.

Dr Movia is developing a quicker, more cost-effective lab model to monitor drug resistance. She’s collecting lung fluid samples from lung cancer patients. The non-small-cell lung cancer (NSCLC) cells, along with other cells, will then be grown within an environment that mimics human tumour tissue and enables the cancer cells to be tested with anti-cancer drugs.

Once the NSCLC cells are grown, Dr Movia will look for lung cancer biomarkers, which are like surface flags on the extracellular vesicles that are released by the cancer cells. She’ll assess if there are any increases in the number of surface biomarkers after repeated drug treatment. This will enable Dr Movia to determine if particular biomarkers could act as useful predictors of drug resistance.

Dr Movia will be using human lung cancer cells which are grown in human serum, rather than the commonly used FBS (foetal bovine serum) that is obtained from the heart blood of bovine foetuses from pregnant cows. This novel, fully humanised model of non-small-cell lung cancer (NSCLC) could pave the way to replace animals used in NSCLC drug testing, saving many animals’ lives. Furthermore, harnessing the potential of extracellular vesicle biomarkers as a way of monitoring drug resistance could be a quicker, more cost-effective, and reliable approach that could be rolled out on a wide scale. If drug resistance could be detected using this model earlier, doctors could switch to different, more effective treatments, vastly improving the prognosis for many lung cancer patients.