“Thanks to charities such as Animal Free Research UK, research that drives forward animal-free research can go ahead. I have loved my project so far and especially love the fact that what I’m doing will reduce or even replace the need for animals in research” – Lauren Hope 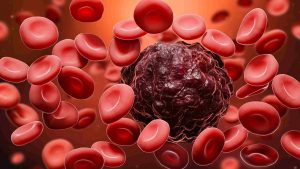 Acute myeloid leukaemia (AML) is a blood cancer that can develop quickly and eventually spread to other parts of the body, including the lymph nodes and the spleen. Adults or children can develop AML but it’s most common in older people, with over 40%of new cases in those aged over 75 years. Only 15% of people survive their leukaemia for more than five years after a diagnosis, so more effective ways of treating this disease are urgently needed.

AML is caused by gene faults in haematopoietic stem cells (precursors of mature blood cells) found in the bone marrow (the soft inner part of the bones). This gives rise to abnormal white blood cells that grow and divide too fast and build up in the blood and bone marrow. Sometimes the leukaemic stem cells become ‘dormant’, stopping their proliferation within the bone marrow which leads to AML drugs not working – a phenomenon known as drug ‘resistance’.

It is due to the bone marrow somehow protecting the cancer cells, but this isn’t fully understood. Drug resistance caused by dormancy is a key cause of AML relapse, affecting around half of patients and contributing significantly to the poor survival rate from this disease.

Animals such as mice are commonly used in AML research. This is not only unethical, inflicting suffering on the animals but there are many differences between humans and animals which means that drugs work differently. Promising findings in animals usually don’t translate to benefits for patients with around 95% of cancer drug candidates failing in people.

Relying on animal experiments means that cancer sufferers are being let down because scientists are missing crucial knowledge about how the disease develops as well as potential drug targets. More humane, human-relevant, and effective ways of studying AML are urgently needed if we are going to improve survival. 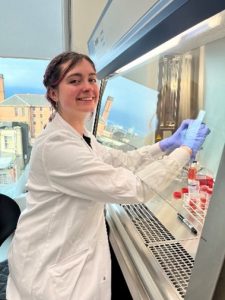 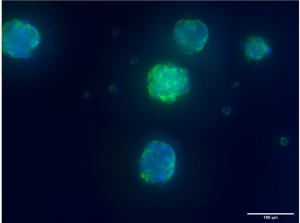 Spheroids within the hydrogel

Lauren Hope, a PhD student at the lifETIME CDT (University of Glasgow), is developing a 3D bone marrow model. She’s using this model to investigate the role of bone marrow in protecting cancer cells and causing drug resistance, and to test new and currently available drugs for acute myeloid leukaemia (AML). Lauren aims to find the best combination of therapies for relapsed AML that can be taken forward to clinical trials.

To create the 3D bone marrow model Lauren is growing AML cells along with HS5 cells – cells that mimic the bone marrow ‘niche’ within a hydrogel. This is a material that can absorb substances (such as cells) and maintain a defined shape and is commonly used for producing contact lenses and wound dressings. When grown together, the two different cells first form a 2D monolayer (a single storey cell layer). The HS5 cells are then grown into ‘spheroids’ – 3D oval shaped clusters of cells. Within the hydrogel, the spheroids and the AML cells sit within a layer of osteoblasts (bone forming cells) simulating the site where dormant leukaemic stem cells are found.

To create a reproducible model in terms of size and shape, Lauren is using a technique called 3D bioprinting (much like 3D printing). This will enable her to test different drugs multiple times more reliably. In collaboration with other researchers, Lauren has assessed the hydrogel’s suitability for growing AML and HS5 spheroids and has evaluated the hydrogel’s stability, stiffness, and structure to optimise it for printing.

Using the 3D printed hydrogel, Lauren has tested AML cells with varying doses of fadraciclib, a drug which kills cancer cells by blocking proteins important for their growth. She has also tested this drug in combination with other current AML treatments (venetoclax, azacitidine and cytarabine) and assessed how effectively these drugs killed AML cells. Her results indicate that fadraciclib appears to be an effective AML therapy. She has found that it works most effectively when used in combination with azacytidine.

This pioneering model of the human bone marrow will offer a unique solution to overcome acute myeloid leukaemia drug resistance and to help find the best treatments through drug testing, replacing animal experiments. This will lead to more effective, reliable, and safer treatments, improving patient survival for this devastating disease, whilst saving animal lives.