Deciphering the role of sex hormones in ageing 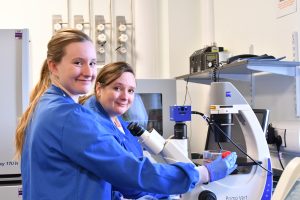 Professor Lorna Harries and Laura Bramwell at the University of Exeter, are investigating the potential for synthetic sex hormones to target and reduce cell ageing. This could provide a springboard for a future generation of preventative treatments for the common, chronic diseases of ageing, enabling clinicians to influence the diseases at their roots, rather than merely attenuating their symptoms.

The burden of age-related diseases and their causes

As we age, our risk of developing chronic diseases such as cancer, osteoporosis, cognitive dysfunction (thinking, speaking, and learning difficulties), cardiovascular disease and diabetes increases. Estimates show that we are affected by age-related diseases for 20% of our lifespan and as we are living longer, the health, social and economic challenges will only become greater.

Age-related diseases tend to develop in combination with each other. This is believed to be caused by the failure of key molecular mechanisms that are common to many tissues. These key drivers are collectively known as the ‘hallmarks of ageing’ and may serve as common targets that enable clinicians to treat multiple conditions at the same time.

One of the ‘hallmarks of ageing’ is cell senescence. Most of our cells naturally divide, and this is how we grow, develop, and repair our tissues. Senescence is where our cells stop dividing and start to deteriorate, effectively marking the end of a cell’s lifespan. Research shows that senescent cells can release chemicals which can also cause other cells to senesce, and it is the accumulation of these senescent cells that contributes to the adverse effects of ageing. Experiments in destroying senescent cells have also indicated that their removal could lead to improvements in organ function.

“It’s well known that men and women age differently. We have identified that some human hormones are capable of ‘turning back the ageing clock’ in human cells, but that these effects are different in male cells compared with female cells. This work may have several implications. Firstly, this may underpin some of the sex differences we see in age-related disease. Secondly, it may explain differences in how well men and women respond to different treatments for the diseases of ageing. Finally, it has implications for research to identify new drugs for those diseases. We are all aware that human cells provide the best environment to unravel human diseases, but our work suggests that results achieved may depend on the sex of the cells being tested. At present, we still don’t know the molecular basis for sex differences in disease susceptibility and response to treatment. This work may help us to unravel that.” – Professor Lorna Harries

The influence of hormones on age-related diseases 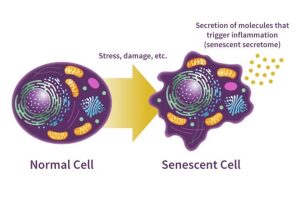 Women generally live longer than men and this is largely because their health span (the proportion of their lifespan which is disease-free) is longer. After menopause, the risk of age-related diseases becomes more similar to men, which suggests female hormones may play a role in targeting and slowing down cell senescence and the development of disease.

Around 17,000 animal experiments are conducted each year in the UK in musculoskeletal research alone. Osteoarthritis, for example, is induced in animals by removing their ovaries to reduce circulating sex hormones to mimic menopause. Animals may also have their genes altered to make their bones and joints susceptible to disease or be deliberately injured to assess how well their joints recover with new treatments.

Findings in animals don’t translate to benefits for patients due to the biological differences between them. Joint problems in humans for example, develop over decades, and this cannot be effectively mirrored in an animal such as a mouse that lives just several years in a very controlled environment.

Finding out if sex hormones can protect against age-related diseases 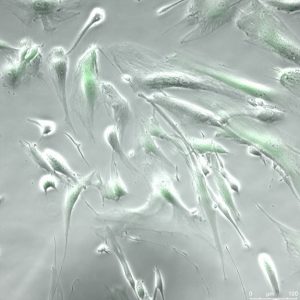 Laura Bramwell is a post-doctoral scientist working with Professor Lorna Harries, Professor of Molecular Genetics, at the University of Exeter’s Animal Research Centre of Excellence (ARC 2.0). Laura is investigating the potential for synthetic progesterones and oestrogens (female sex hormones) to target and reduce cell senescence in the lab, effectively turning back the cells’ ageing clock. She’s treating ageing human nerve cells, chondrocytes (which form cartilage) and cardiomyocytes (heart muscle cells), grown in the lab, with plant hormones that are similar to human sex hormones to assess their influence on cell ageing. She’ll be looking for features of ageing, including cell markers (which are like cell surface flags) indicative of damage to proteins within DNA, and markers that show how quickly the cells are dividing.

To determine if taking synthetic sex hormones, such as the combined pill, before menopause protects against future age-related diseases including musculoskeletal disorders (disorders of bones, cartilage, ligaments, tendons, and connective tissues), dementia, cardiovascular disease, cancer, and type 2 diabetes, Laura is analysing data from the UK Biobank (a large-scale database containing in-depth genetic and health information collected over four years). She and her team are also carrying out the first human trial of its kind to assess the potential of naturally occurring plant equivalents of human sex hormones as therapies for osteoarthritis and osteoporosis – conditions that are responsible for a huge amount of disability and poor quality of life in our ageing population.

This research could identify targets to slow or halt cell ageing. This could provide a springboard for a future generation of preventative treatments for the common, chronic diseases of ageing. This would enable clinicians to influence the diseases at their roots, rather than merely attenuating their symptoms, leading to significant health improvements for people.

The research will also have a significant impact on saving animals lives. Only human cells will be grown and UK BioBank information will give the researchers the power to decipher links between medication and what happens to health later in life without having to administer drugs to animals. Only people will be tested in the clinical trial using plant molecule sex hormone surrogates so the research will therefore be more humane and completely animal free.