Dr Sylwia Ammoun and PhD student Kevin Herrera at the University of Plymouth, are re-purposing drugs already in clinical use and testing them using an animal-free ‘in vitro’ approach using lab grown human brain tumour cells, to accelerate progress in uncovering more effective therapies for patients with multiple brain tumours.

Causes and treatment for Neurofibromatosis type 2 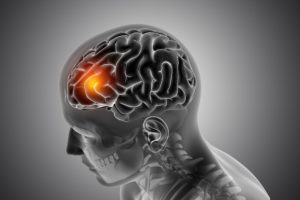 Neurofibromatosis type 2 is a genetic condition, affecting around 1 in 25,000 people.

Neurofibromatosis type 2 (NF2) is a genetic condition, affecting around 1 in 25,000 people, and causes tumours to grow along nerves. The tumours are usually non-cancerous (benign) but may cause a range of symptoms such as hearing loss, balance problems, weakness in the arms and legs and persistent headaches. NF2 is caused by a faulty gene. This results in the loss of an anti-tumour protein and the subsequent development of uncontrolled tumours in the nervous system (schwannomas, meningiomas and ependymomas). The gene fault may be passed down by a parent, or it can happen spontaneously. 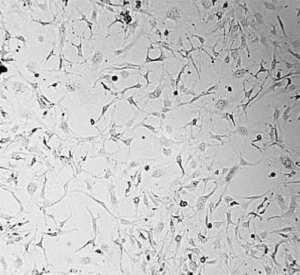 No drug treatments exist for NF2 patients suffering multiple brain tumours. Current treatments include surgery and radiotherapy, which are invasive and may not be options if the tumours are inaccessible or located in delicate parts of the nervous system. Meningioma is the brain tumour type that causes the most NF2 deaths – these tumours often recur, growing much more aggressively when they do.

Mice are most commonly used to study NF2 and to test drugs. These can be genetically modified mice, with the faulty NF2 gene that causes tumours to develop, or mice with human tumour cells transplanted into them. The growth of these tumours causes discomfort and pain to the animals, and they are then killed so that their tissues can be studied, and more tests carried out. Furthermore, healthy mouse tissue is also needed for comparison to cancerous tissue, which demands killing additional animals. However, fundamental biological differences between people and animals mean that cancers can develop differently, and drugs can behave differently.

A staggering ninety-two per cent of drugs that show promise in animal experiments do not translate to benefits for patients. More effective, human-relevant treatments for NF2 are therefore urgently needed. 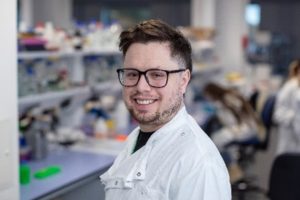 “I use human cells from actual brain tumours to test potential anti-cancer drugs. This means I have completely replaced animals in my experimental design! Animal Free Research UK has allowed me to “show instead of tell” my peers that it is possible to reduce our reliance on animal-derived materials in the lab while still carrying out meaningful research.” – Kevin Herrera

A solution: Developing an in vitro approach for drug testing

Kevin Herrera is undertaking a PhD with Dr Sylwia Ammoun at the University of Plymouth. He’s using an animal-free ‘in vitro’ approach and growing human brain tumour cells (taken from NF2 patients) in the lab.

Kevin and his team have recently found a new set of NF2 drug targets called ‘TAM family receptors’. This is a family of proteins found on the surface of several tumour types. Sometimes the proteins are ‘switched on’ when they shouldn’t be. They drive cancer cell survival, growth and spread and can stop drugs working (this is known as ‘drug resistance’).

Several TAM blocking drugs are now in development and have already been clinically tested and shown to improve the effectiveness of treatment for other cancers such as lung, brain and breast cancer. Kevin believes that these drugs could be re-purposed as a new therapy for NF2 patients. He plans to test different anti-TAM drugs using the human brain cell in vitro model and in the longer term, help run clinical trials for these drugs in NF2 patients.

This research will help to identify new effective therapies for NF2 patients. The research team will promote the usefulness of the animal-free in vitro cell model for investigating diseases and testing drugs, to the wider scientific community. If adopted by researchers more widely, this model would replace animals, ending suffering and saving lives. The ‘bench to bedside’ transition through the re-purposing of drugs already in clinical use, or in trials for other forms of cancer, would mean faster progress in finding more effective treatments for people suffering from NF2.