How cosmetic surgery can help us beat skin cancer

How cosmetic surgery can help us beat skin cancer

Professor Mike Philpott explains how his team of expert researchers are helping to replace the use of animals and test potential drugs for human skin, head and neck cancer…

For skin cancer we focus on basal cell carcinoma, which is the most common human cancer. This frequently occurs on the face in regions that are difficult for surgery and often results in disfiguration. Our focus has been on a pathway known to be central to basal cell carcinoma, the Hedgehog signalling pathway (HH).

The project aims to model the HH pathway in human skin cancer by knocking down a receptor – called patched (PTCH) – which is mutated in most basal cell carcinoma.

This work has just been published in the journal ‘Cancer Research’. In this paper we show that some of the drugs often used to treat basal cell carcinoma have little effect in reversing genetic changes seen when PTCH is knocked down.

We think this may explain why these drugs often have limited clinical effect and also tumours often re-occur. Of course, many of these drugs were tested using mice.

Novel signalling mechanism could be reason for drug resistance

Through this work, we have also observed that another component of the HH pathway, called smoothened (SMO), moves from the cell membrane to the nucleus. This may be a potentially novel signalling mechanism.

We have observed this in human tumours and further work is being carried out to investigate whether it is the whole SMO molecule or only a specific region that moves to the nucleus. We have shown that in the nucleus it has signalling properties and believe this may be related to drug resistance.

Work in the Animal Replacement Centre has also focussed on next generation sequencing of both basal cell carcinoma and sebaceous gland carcinoma of the eye. We have identified potentially new genes for both diseases. These will now be followed up in our human cell models. 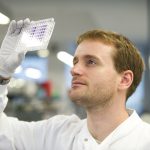 The other major focus in the Animal Replacement Centre is research by Dr Adrian Biddle (Animal Free Research UK funded lecturer in animal replacement science). He is building in vitro models with greater relevance to human cancer so that we can further test the importance of different cellular sub-populations in tumour invasion, metastasis and therapeutic resistance.

There are three strands to this project:

The ability to incorporate fresh human tumour specimens into the model (without prior passage in 2D culture) would be a really exciting advance. This work is being carried out using specimens of both oral and breast cancer.

Your generous support is helping to beat human diseases and consign animal research to history. By donating, you are contributing to developing some of the most advanced and successful human-related techniques in many areas of medical research, including Professor Philpott’s work into fighting cancer.