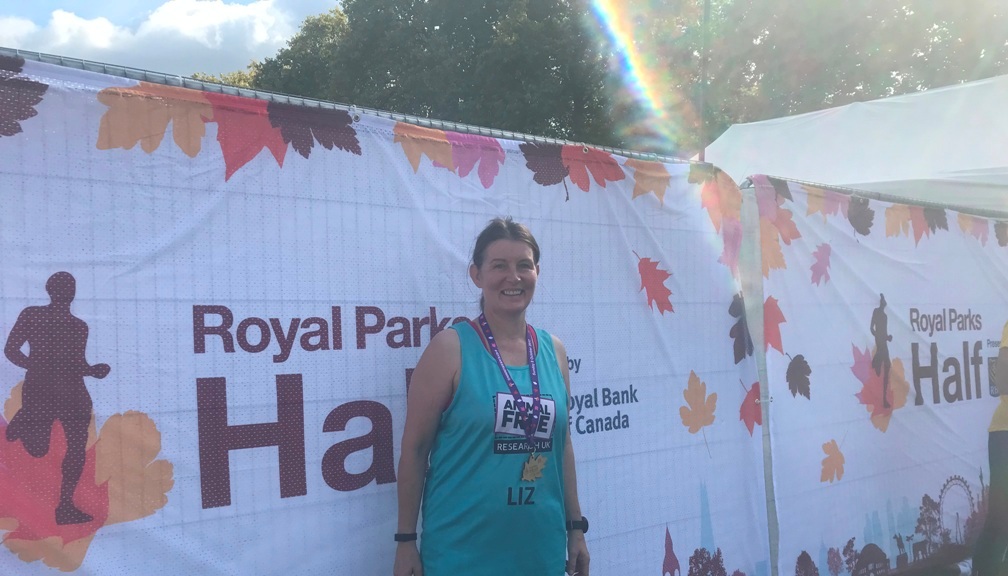 Supporter Liz Begg is our only London Marathon runner this year.  Liz managed to get her own place in the London Marathon and very kindly decided to run it for Animal Free Research UK.

Last year, over £3,000 was raised by Doug Maw in the London Marathon.  With your help we would love to smash that target for 2018.  Find out more about Liz and show her your support in her ninth and final ever marathon.

Liz at the Royal Parks Half Marathon in 2017.

“I am a keen runner and a member of my local running club, the Arbroath Footers.  I got into running about 19 years ago and although I was totally out of puff on my first run and shattered, I realised there was something addictive about it.  To date I’ve completed eight marathons, most of which have been for various animal charities.  This year I am doing the London Marathon for Animal Free Research UK (AFR UK).  This will be my ninth marathon and my last!

I support AFR UK as I am strongly against vivisection as its wrong on so many levels.  I believe that the wealth and influence of the pharmaceutical industries is part of the reason the powers that be allow animal experiments to continue on such an increasing and massive scale.  I remember in the late 70’s, when I was younger, watching programmes on TV about lung cancer experiments on beagles, feeling absolutely horrified beyond belief that such cruelty and exploitation was going on in our so called animal loving society.  I knew then that I would always be against this sort of barbarity. Being against vivisection wasn’t enough for me, I wanted to do more.

My science teacher at school had a booklet on his desk about the then Scottish Society for the Prevention of Vivisection (SSPV), which he allowed me to borrow and take home.  I read it and after that I became a life member of the SSPV now called One Kind.  I swiftly followed into activism. 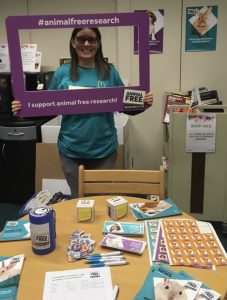 Liz carrying out an awareness stall at local library

During the 80’s I attended many demos up and down the country, Porton Down being one of them, which is where the MOD test weapons etc. on defenceless animals, horrific!  One of my first areas of activism was when I became a teenage member of The Hunt Saboteurs Association and joined in with a protest against a fox hunt in Renfrewshire, where I grew up.

I’m a lifelong vegetarian and latterly vegan.  Over the years I’ve been involved in setting up animal rights groups, one being when I lived in North Yorkshire in the 1980’s, holding regular vigils outside a large vivisection laboratory on the outskirts of Harrogate, and weekly awareness raising stalls in the town centre.

I firmly believe that by supporting the ground breaking work of AFR UK, I can help put the practice of animal experimentation well and truly into the history books, and we will look back on it one day in the same way as we do the holocaust.  Please donate and support me on my ninth and final marathon for AFR UK, thank you!”