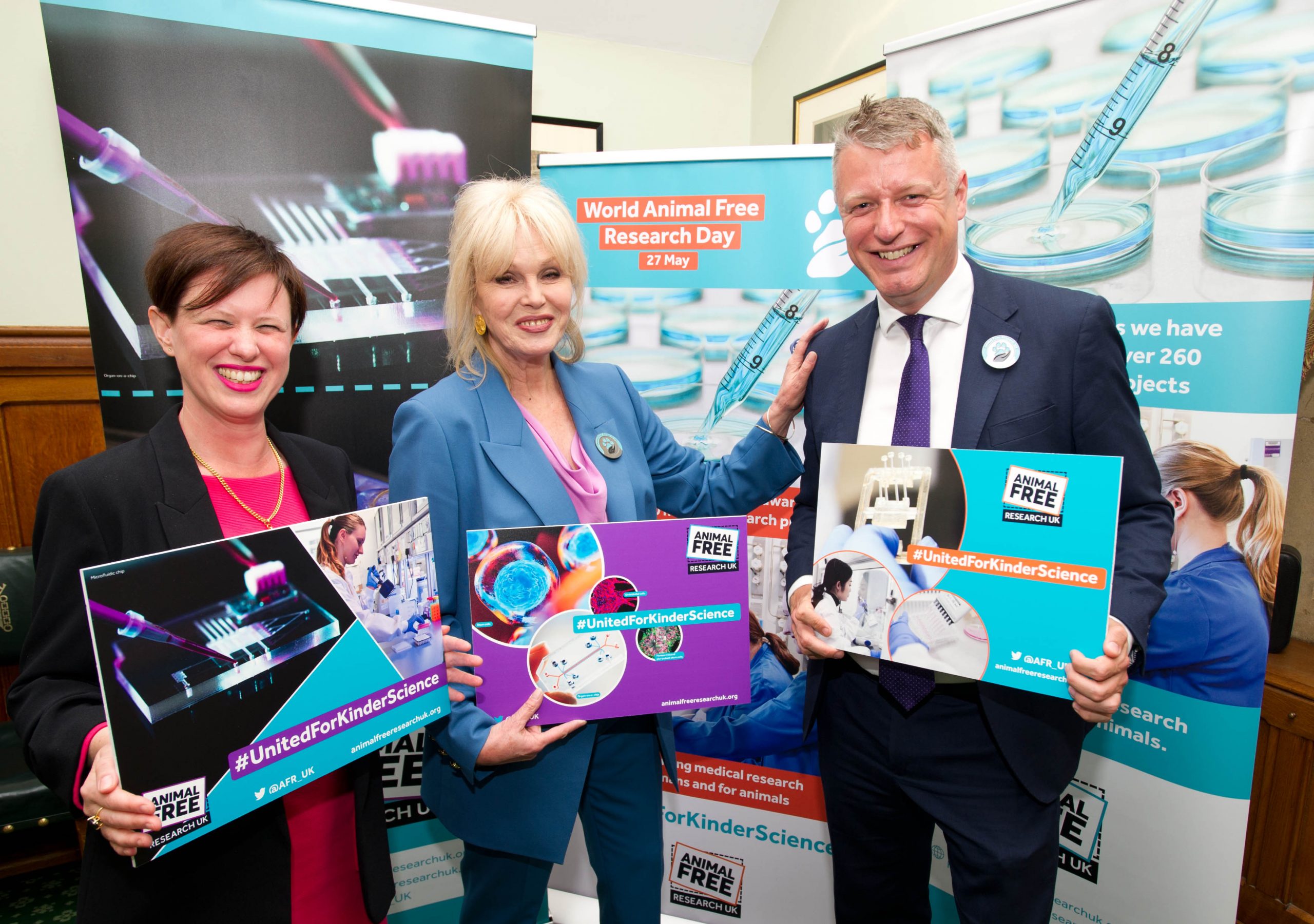 Animal protection campaigner Dame Joanna Lumley delivered a speech in the House of Commons on Monday May 23rd 2022  – and called on the government to launch  a formal inquiry into how the UK conducts medical research.

The Patron of Animal Free Research UK also urged the government to appoint a Minister to lead the UK’s transition to human relevant science.

In a keynote speech at a parliamentary reception event, Dame Joanna also warned how current government policy on animal-based medical research is failing patients, with 92 percent of new medicines tested on animals failing to reach market and benefit humans.

She told policy makers: “Using animals in medical research is not only unethical, costly and unjustifiable, it is being increasingly accepted among the scientific community that this practice fails patients.  New medicines which appear safe and effective in tests on animals often fail to be approved for market because they pose significant safety and efficacy concerns during human trials.

“This lack of progress in addressing many diseases is because of the outdated research methods still practised in UK laboratories – those which have left patients and their families frustrated, and without hope for effective treatments.

“So today we are calling for a formal inquiry to be held into current medical research. We also ask that the Government appoints a specific Minister charged with leading the UK out of Victorian-era medical research and speed up the transition to the already available 21st Century human relevant science – that which is proven to truly benefit humans and animals.”

The TV and film star added: “Britain has the scientific and innovative brains – and the backing of the animal loving British public (2) – to establish scientific approaches that can best deliver human relevant results and provide the focus of future biomedical research, as well as greatly benefitting the UK economy.

“This government wants Britain to be a global leader. It certainly has the creative and innovative capacity to be so. Now it truly has the opportunity to become a science powerhouse to lead the world to a more effective, kinder science which will benefit humans and animals,” she will told a gathering of cross-party MPs.

Luke Pollard, MP for Plymouth, Sutton and Devonport said: “Animal protection is an issue of vital importance which is rightfully climbing up the political agenda. There has been some welcome progress in this field, but many of my parliamentary colleagues and I would encourage the Government and the country’s science community to go further. Of course, we cannot leave behind animal testing overnight, but we would like to see the UK position itself as a world leader when it comes to advancing both medical science and animal welfare.”

Anna Firth, MP for Southend West said: “Like my predecessor, Sir David Amess, I am also very passionate about animal welfare and believe that we must modernise medical research for the advancement of ethical science in the UK. I support the calls for an action plan to be implemented to support this very important mission which is being championed by Animal Free Research UK.”

Carla Owen, CEO of Animal Free Research UK said: “Around the world, there is growing momentum behind the transition to human relevant science. Developments range from the US Food and Drug Administration’s strategies to integrate human relevant methods into regulatory testing, to the Dutch Government’s support for collaborative efforts to accelerate the take-up of animal free techniques. If the UK is to keep pace, bold action is needed from policy makers.”