How can UK the lead the world in science and animal welfare?

How can UK the lead the world in science and animal welfare?

Every minute of every day, six animals are used in research in the UK. Yet as our new Modernise Medical Research Report highlights,  forward-thinking researchers  – some funded by Animal Free Research UK  – are making inspirational progress in the development of high-tech alternatives, such as organ-on-a-chip technology.

That’s why we have launched our medical modernisation campaign  – to urge the UK Government to take bold and decisive action to replace as soon as possible the outdated practice of animal research with cutting-edge, human relevant methods.

The recent Queen’s Speech re-stated the Government’s dual commitments to promote animal welfare and underscored its aspiration for the UK to become a global leader in the life sciences. 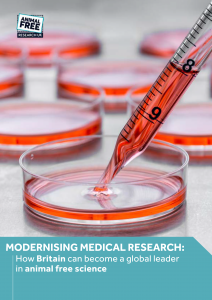 We applaud these ambitions, and our call-to-action Modernise Medical Research Report details how ministers can deliver both.

Despite its shortcomings such as the exclusion of invertebrate animals, we also welcome the long called for Animal Welfare (Sentience) Bill which will see the vital concept of animal sentience finally enshrined in law.

The Bill makes provision for an Animal Sentience Committee which will review and report on whether the Government has given due regard to animal welfare in formulating and implementing policies.

As we detail in our report, this scrutiny must apply to the licensing of animal experiments.

Indeed, the day after the Queen’s Speech, the Government published its Action Plan for Animal Welfare which will seek to improve protection for pets, farmed animals and wild animals.

But those animals used in experiments were covered by just one sentence: “[Government will] Continue to commit to maintaining high standards of protection where procedures are undertaken on live animals for scientific or educational purposes.”

This glib commitment to high standards of protection rings hollow – more so after the latest Home Office report on lab experiments describes harrowing incidents such as animals dying due to inadequate food and water provision; if animals are not even afforded the staples to keep them alive, one can only with horror imagine what else they are subjected to.

Worryingly, the Government is short for answers, it seems. In answer to a recent Parliamentary Question about how the commitments made in the Queen’s Speech would translate into improved protection for animals in labs, Cabinet provided just three sentences referencing existing guidance -with zero sign of ambition for change.

It is often assumed that the UK is already a world leader in the fields of animal welfare and scientific research.  And our government likes to talk the walk of Britain to becoming in a post Brexit world a global science superpower.

We at Animal Free Research UK would like nothing more than the UK to be so – inspiring the world with ethical sciences that benefit human and animal kind.

But Animal Free Research UK never assumes as all our work is rigorous and evidential. We present factual, reliable information and all our work is evidence-based and thoughtful, and that why it’s respected by our peers.

As our new report shows, the Government has much to learn if it wishes to realise its vision for Britain being a science superpower.  We examined the actual concrete steps – in some cases laws – being taken in other countries to accelerate the transition to animal free research, such as the US Environmental Protection Agency’s commitment to phase out tests on mammals by 2035 and collaborative work being done in the Netherlands to develop animal free strategies. 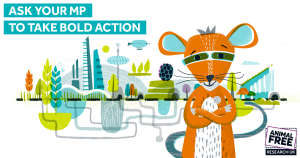 Our Modernise Medical Research campaign calls on the Prime Minister to learn from these activities and to mirror the bold actions of other national leaders.

One move Boris Johnson could make to catch up with our international peers is to create a new department or ministerial position tasked exclusively with accelerating the replacement of animals. This role would undertake activities such as producing detailed plans, facilitating collaboration and leading the reform of international guidelines on the testing of medicines.

As we prepare to mark the first World Animal Free Research Day on May 27, we call upon our Prime Minister to show how serious he really is about leading the world in science and animal welfare.

He should use May 27 as inspirational opportunity to take a bold and future-focused approach to benefit people and animals, as this will firmly establish the UK as a world leader in scientific research and animal welfare.

He, like us all, needs to do his  bit to create a better future for humans and animals.

So please take a moment to support our Modernise Medical Research campaign by contacting your MP and asking them to urge the Prime Minister to act. 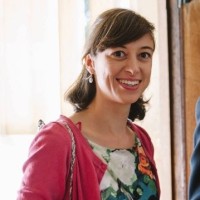