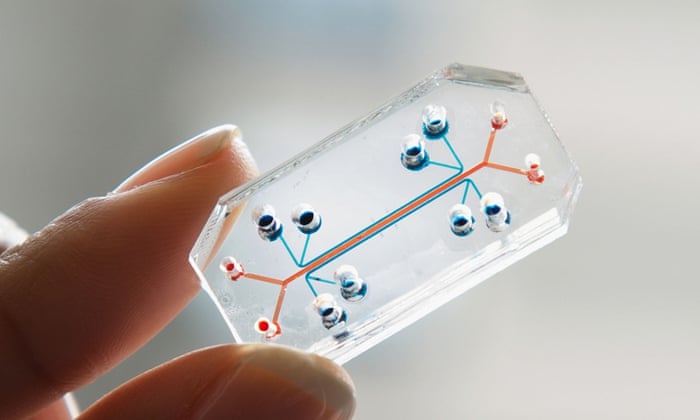 The conventional drug development system is lengthy, costly, and ineffective as it relies on animal research that fails to predict human reactions to new drugs. This is reflected by high failure rates – consistently over 92% of new drugs, which appeared safe and effective in animal tests, fail in human clinical trials. This is mostly for unforeseen issues with safety and efficacy.

One good illustration for the failure of using animals to predict drug toxicity in humans is drug-induced-liver-injury (DILI). This is when a drug that has been approved in animal tests emerges as hepatotoxic (something that is toxic for the liver) causing irreversible damage to the human liver, or even death because of liver failure. DILI is often overlooked but it is one of the most cited reason for the withdrawal of medications from the marketplace, with the chances of an individual drug causing liver injury ranging between 1 in 10,000 and 1 in 100,000 people

Animal reliance in preclinical trials – before testing drugs in humans – has caused the pharmaceutical industry to waste considerable time and resources developing many drugs that are destined to fail – but this can change. 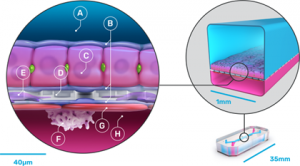 Figure 1: Schematic of the Emulate Liver-Chip. This diagram shows primary human liver cells (C) within the upper channel (A), that are sandwiched within an extracellular matrix (B) – a 3D network that helps cells attach to, and communicate with, nearby cells. The top channel is separated by a porous membrane (D) from the lower channel (H) containing human liver endothelial cells (G) – that regulates exchanges between the blood and liver, Kupffer cells (F) – that are liver blood cells, and stellate cells (E) – neuron-like cells that regulate interactions between the blood and the liver.

Organ-on-a-Chip technology involves growing human cells on small devices to mimic organs of the body, such as the liver (see Figure 1). This technology could help predict and identify toxicities earlier, compared to conventional approaches (using animals, or cells grown simply in a dish).

The CEO of an organ chip company called Emulate, Lorna Ewart, and colleagues have just published a study in the prestigious journal Nature Communications Medicine. They analysed 870 individual human Liver-Chips to determine how well they predicted DILI across a blinded set (to avoid bias, scientists performing the experiment do not know which drug they are testing) of 27 known toxic and non-toxic drugs. These drugs that initially passed animal testing evaluations ultimately caused nearly 250 deaths and 10 liver transplants. The Liver-Chip system outperformed conventional models, with an 87 per cent chance of predicting liver damage/toxicity compared with a 47 per cent using 3D liver models and 0 per cent using animals – as the 27 drugs all previously passed preclinical testing (see Figure 2).

Experts designed an economic model to assess how much money could be saved, or even generated by using the Liver-Chip compared to using animals for drug testing. They show that it could generate over $3 billion annually for the pharmaceutical industry through increased small-molecule research and development productivity. This money could go towards the development of more, safer, more effective drugs for patients.

These results suggest that widespread acceptance of Organ-Chips could decrease drug attrition, replace animals, help minimize harm to patients, and generate billions in revenue for the pharmaceutical industry helping in the development of more, effective drugs.

Animal Free Research UK celebrate this crucial step to overcoming huge failure rate in drug discovery and development, and towards the end of animal testing and research more generally.