Can continuing animal use in research, including dog experiments, be justified ethically and scientifically? 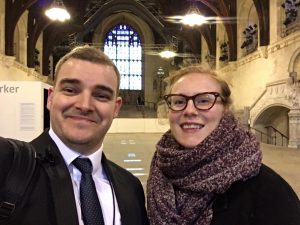 This was the key question at the All-party Parliamentary Dog Advisory Welfare Group (APDAWG) meeting at the Houses of Parliament on the 27th February 2018. In 2016, 4932 procedures were conducted on dogs, 93% of which were beagles. 21.6% of these procedures were classed as moderate and 0.3% severe. Our team attended to get involved in the discussion of the use of dogs in animal experiments.

We heard from several speakers at the meeting, coming from a broad range of interests. From the opposing sides of animal research conducted at the Royal Veterinary College, to how dogs are bred for animal research (Marshall Bio UK) and how they should be re-homed (Run Free Alliance).

Making the case against experimenting on dogs

From his own research findings, Dr Jarrod Bailey (senior research scientist, Cruelty Free International) talked about how dogs are poor predictors of pharmaceutical toxicity in humans and that findings from experiments on dogs does not add any more confidence that a drug will be safe in humans. He also discussed how the cognitive and emotional capacity of dogs leads to their great psychological suffering during experiments and that this alone should be enough for a case against experimenting on dogs.

“Dogs have same understanding and awareness of a 3 year old child”. Dr. Jarrod Bailey from @CrueltyFreeIntl Time to rethink why we still test on dogs for pharmaceuticals. #APDAWG #dogs #animaltesting #sentience pic.twitter.com/k134iGrK76

Animal research should stay in the past

Tom Holder, from Understanding Animal Research, discussed the Home Office statistics about the number of dogs used in research and offered a counter interpretation of the data presented by Dr Bailey. He also spoke about the extent that animal research has played historically, with 89% of Nobel prizes in physiology or medicine involving animal research. However, Cruelty Free International CEO, Michelle Thew, made a very good point that just because animals have been used previously, it does not mean that they should be used in the future. Animal Free Research UK share this future facing vision – we want to consign animal research to history.

Fabulous words from Michelle at @CrueltyFreeIntl “just because dogs have previously been used in drug research doesn’t mean it should continue in the future”. @APDAWG1 #dogs #apdawg

The work and research done by Animal Free Research UK soon became the subject of the debate. Our Science Communications Officer Emily made it clear to the parliamentary group that replacements to animal testing and dog experiments do exist, and that our focus is on completely replacing all animals in medical research. This argument was widely supported by other groups attending the conference, and even gained some positive recognition from opposing parties.

Marc Abraham (@marcthevet) mentioned that it was difficult to find speakers that would advocate for animal research to attend the meeting, as they feared backlash from anti-vivisection campaigners. We found that this meeting offered ‘neutral-ground’ to both parties. Opening productive dialogues with researchers that use animals is a key way of educating and encouraging them in ways that they can incorporate replacement technologies within their research practices.

Dr Lisa Cameron MP, chair of APDAWG, furthermore expressed that we should be constructively moving forward by working together to reduce the number of dogs in animal experiments. Her involvement was integral in making connections between campaigners and researchers during the event.

This APDAWG All-Party Parliamentary Group (APPG) forum between campaigners, researchers and industry representatives may also lead to some much needed development in the UK’s animal welfare legislation. Especially as discussions take place within the halls of Westminster itself and under the eyes of invested MPs.

It was reassuring to see that the majority of charities and campaigners present, Animal Free Research UK included, were open and willing to work together in the near future. Great interest was expressed from many parties in forming a more united front and continuing to meet as part of the Parliamentary group. This would also include continuing an open dialogue with academics and industries who are in favour of animal testing, so that we can more easily share information and promote animal-free techniques. This will be an important step towards changing the way medical research is conducted in the future.

Animal Free Research UK intends to continue this commitment to working more closely with our fellow campaigners, and also to keeping the debate open, tempered and scientific.

Our work is funded entirely by your generous support. Your donation helps to fund some of the most advanced and successful human-related techniques in many areas of medical research. We do not use animals.