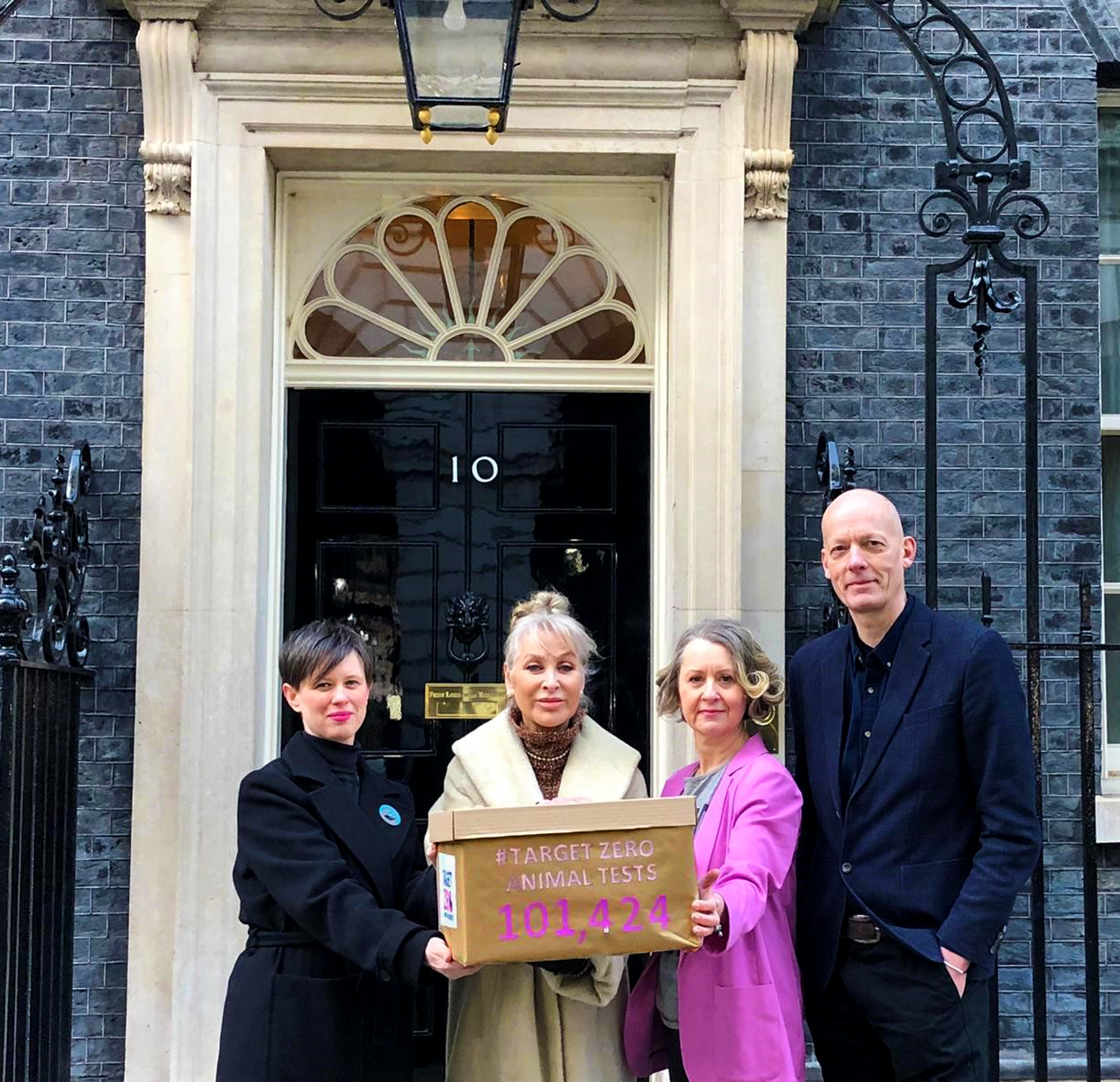 Animal Free Research UK, Cruelty Free International and OneKind have handed over their #TargetZero petition – which calls on the government to pro-actively plan an end to animal testing in the UK – to the Prime Minister’s Office at 10 Downing Street.

They were joined by supporters and Carol Royle, actor and Patron of Animal Free Research UK.

The petition has gained the public’s support, with over 101,000 signatures. It was originally launched following the release of the most recent annual Home Office data which highlighted the extent of animal testing in Great Britain. 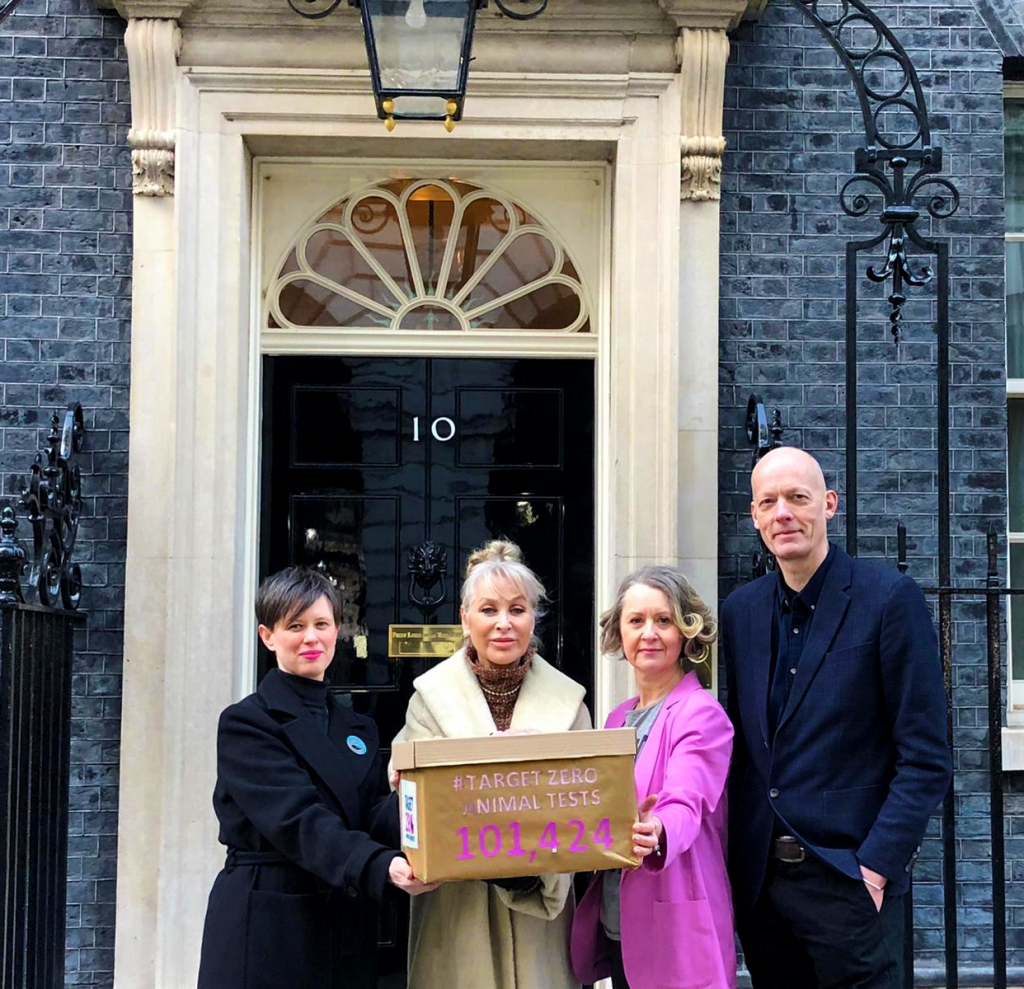 Despite the overwhelming public support for ending animal tests, around three million animals are used in experiments each year in the UK. On this trajectory, without intervention, the organisation’s estimate that animal tests will continue in the UK for at least another 90 years.

Home Office data revealed that the number of experiments on dogs (3%), cats (11%) and horses (3%) had risen, underlining that there is still no concerted effort to end these experiments. ***

Research carried out by YouGov on behalf of Cruelty Free International shows the public wants to see action taken to end animal tests, with 7 in 10 (70%) finding it unacceptable for animal tests to continue to take place for the next 90 years and 65% wanting to see a plan to phase out animal experiments in the UK.[1]

Additionally, polling carried out for Animal Free Research UK found that over two-thirds (68%) of respondents would support ending animal experiments in medical research in the UK and replacing them with non-animal alternatives.[2]

Cruelty Free International, Animal Free Research UK and OneKind hope that the Target Zero petition will demonstrate the public’s strong opposition towards animal testing and press the Government to end its reliance on outdated science.  Instead, the organisations urge Ministers to embrace effective and safe non-animal methods to discover treatments and cures for disease, illnesses and to ensure cruelty free product safety.

Carla Owen, Chief Executive Officer of Animal Free Research UK, says: “There is a united front among the public and organisations to end outdated medical research and it’s growing stronger and larger by the day.  Britain is well placed to lead the world towards a kinder science – but it must end archaic practices which not only cause immense suffering but hinder research into human diseases.

Reform is urgently required if we are to secure our international reputation as a science superpower and a nation that cares for people and animals.”

Michelle Thew, Chief Executive Officer of Cruelty Free International, says: “We joined forces with Animal Free Research and OneKind and with the British public to show decision-makers how strongly people feel about ending animal testing once and for all.

We urge the Government to work across its departments and with stakeholders to come up with an ambitious and concerted plan that will finally bring an end to the suffering and death of millions of animals in this country every year.”

Bob Elliot, Director of OneKind, says: “The Target Zero petition has shown the strong support amongst the public for a phase out of animal experimentation in the UK. We urge the UK Government to listen to the public and commit to a clear action plan to make this happen.

We also encourage the Scottish Government to take action. While the power to ban animal testing is reserved to the UK Government, with its world leading universities, pharmaceutical companies and life sciences sector, Scotland has a key role to play in accelerating the transition to humane science.”

*** While the Home Office statistics noted an overall decrease in the total number of experiments in 2020 from 3.4 million to 2.9 million, the Government itself largely attributes this to the pandemic and two national lockdowns.

[1] All figures, unless otherwise stated, are from YouGov Plc.  Total sample size was 1,765 adults. Fieldwork was undertaken between 13th – 14th September 2021.  The survey was carried out online. The figures have been weighted and are representative of all GB adults (aged 18+).