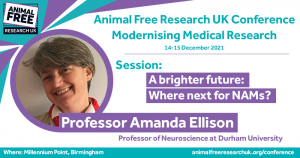 Amanda Ellison is a neuroscientist and physiologist who never got past the why phase.

She started her University education with a Natural Science degree that specialised in Physiology at Trinity College Dublin. Wanting to focus on how the brain brings about our behaviour, Amanda made the jump to the Psychology department to carry out a PhD in visual neuroscience. During this time, she got involved with a new human neuroscience technique on the block: Transcranial Magnetic Stimulation (TMS). She has since used it to ask questions about what different regions of the brain do and how they talk to each other, important to know if we want to restore function after damage. Before this kind of neurostimulation, these experiments would have been done by lesioning animal brains.

Amanda’s first job out of her PhD was funded by the Dr Hadwen Trust at Oxford University. Having moved to Durham University to set up her own lab, The Dr Hadwen Trust funded a postdoc in Amanda’s lab to fully establish TMS as a human relevant animal replacement technique. Now a Professor of Neuroscience at Durham, she enjoys inspiring the next generation of animal replacement scientists and is passionate about scientific communication. She has just come to the end of her tenure as an Animal Free Research UK trustee. 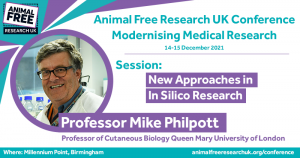 Mike Philpott is currently Professor of Cutaneous Biology at Barts and The London School of Medicine and Dentistry, Queen Mary University of London (QMUL) and leads the Animal Free Research UK Animal Replacement Centre of Excellence (ARC) at QMUL.

Mike Philpott originally worked for the Ministry of Defense (Navy) before going on to study Marine Biology and Biochemistry at the University of Wales, Bangor graduating in 1986. He obtained his D. Phil from the University of Oxford in 1990 the title of his thesis was ‘Studies on isolated hair follicles’ from which he published on the in vitro culture and growth of human hair follicles now referred to as the ‘Philpott model’. He continued his research into hair follicle biology at the University of Cambridge before taking up an academic post QMUL in 1996.

His research interests include hair biology, wound healing, the role of cortisol in skin biology, steroidogenesis and sebocyte differentiation and the role of hedgehog signalling and Gli transcription factors in the development of basal cell carcinoma. During his PhD Mike Philpott developed a very strong interest in animal replacement science and much of his subsequent career has focused on the development of human models for human skin disease. 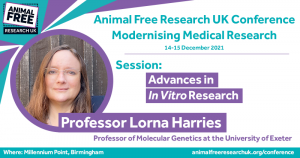 Professor Lorna Harries gained her PhD from University College London in 1994. Lorna established the RNA-mediated disease mechanisms group at Exeter in 2006, and holds a personal chair in Molecular Genetics at the University of Exeter Medical School and a position as co-founder, co-director and Chief Scientific Officer at SENISCA Ltd, a spin out company founded on the Harries lab’s research.

Lorna also heads the Exeter Animal Free Research Centre of Excellence (ARC 2.0) funded by Animal Free Research UK. The Harries lab have interests in -omics approaches to the study of ageing and age-related disease processes in humans, and her work takes a genes to systems approach, ranging from ‘big data’ analyses to detailed individual molecular analysis of particular genes. Her team were the first to report dysregulation of alternative splicing as a new, and druggable, hallmark of ageing, and a demonstration of this in human primary cells. 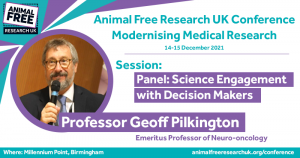 His career in brain tumour research started at the Middlesex Hospital Medical School in the early 1970s, subsequently spending 23 years at the Institute of Psychiatry, King’s College, London, latterly as Professor of Experimental Neuro-oncology. In 2003 he moved to the University of Portsmouth, as Professor of Cellular & Molecular Neuro-oncology, Director of Pharmacy & Biomedical Sciences Research and Head of the Brain Tumour Research Centre.

He is passionate about human in vitro models in medicine, particularly in the context of pre-clinical testing and champions the use of re-purposed drugs in cancer treatment, which, he believes, can be fast-tracked into clinic without recourse to use animal models. 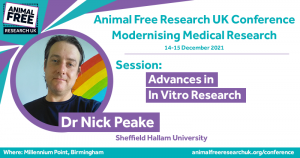 Nick’s research focusses on the role of the extracellular environment on the progression of colorectal cancer. With a background in the role of the extracellular matrix in disease, he currently runs projects which focus on how alterations to this matrix influence cancer growth, invasion, and the efficacy of treatments. Nick’s team uses a variety of in vitro models to mimic the colorectal cancer microenvironment, allowing the assessment of the role stromal cells that surround a growing cancer play – particularly fibroblasts – and how biochemical and biomechanical features influence cancer cell behaviour and responses.

Nick is particularly interested in an enzyme called transglutaminase-2 which causes matrix cross-linking and stiffening and is linked to poor disease outcome, and is also interested in the role of extracellular vesicles in driving the cross-talk between colorectal cancer and its microenvironment, and their contribution to enzymatic and biomechanical remodelling. The aim of this research is to understand the interactions that link tissue structure to disease progression, and to explore the potential to develop new ways to improve treatment of advanced colorectal cancer which currently has a poor prognosis. 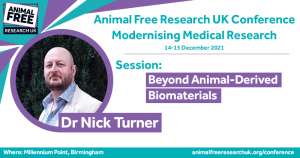 He has 20 years’ experience in the field of molecular imprinting with a focus on the biological applications of these materials. As an expert in bioanalytical chemistry, Dr Turner believes that nanoscale biomimetics can be applied to solve numerous challenges that face researchers today. Be it in the development of clinical diagnostics, trace chemical analysis, or advanced therapeutics.  Dr Turner believes that we have the capability to surpass natural molecular recognition elements by building artificial “locks” for biological “keys”, and replace the need for using antibodies or enzymes in many systems. 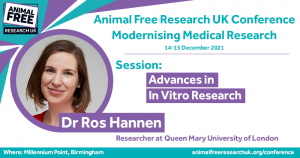 Ros completed her BBSRC-Unilever PhD studentship in dermatoendocrinology at the Blizard Institute, Queen Mary University of London (QMUL) in 2009 where she identified novel steroid production in keratinocytes.

She actively created all her ubsequent postdoctoral research posts with successful funding to investigate the disruption of steroid synthesis in inflammatory skin disease. During this time, she observed that critical pathways in keratinocyte steroid production (that overlap with xenobiotic metabolism) rapidly shut down with the act of standard culture, and that new approaches to skin culture were required to advance dermatology.

Ros then set about addressing fundamental limitations of skin culture, that cause rapid degradation of skin barrier function and viability. In 2018 Ros won the MedTech SuperConnector and QMUL Life Sciences Initiative awards to accelerate the commercial development of her research; and most recently an Innovate UK Smart grant that lead to the formation of a spinout company called Keratify. In addition, Ros continues to lecture at QMUL, where she collaborates with researchers across the UK to assess inflammatory and metabolic processes in psoriasis and dandruff, identify triggers of transplant rejection and assess technology for healing chronic wounds.

She is dedicated to creating advanced human skin models to tackle the hardest challenges in dermatology that could never be resolved with animal models. 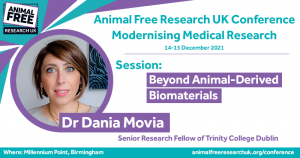 Dr Dania Movia is a Senior Research Fellow of Trinity College Dublin. She is part of the Laboratory for Biological Characterisation of Advanced Materials (LBCAM) at the Trinity Translational Medicine Institute (TTMI), associated with the Trinity St James’s Cancer Institute. She received her PhD at Trinity College Dublin in 2012, and subsequently she was awarded a Special Purpose Certificate in Academic Practice by the same university in 2018.

Dr Movia is a member of several professional bodies and organisations, which include the Irish Lung Cancer Alliance (ILCA) and the Scientific Advisory Panel of Animal-Free Research UK. She has received funding from several organisations including the Irish Research Council, the Johns Hopkins Center for Alternatives to Animal Testing, and the European Union’s H2020 Framework Programme. She has authored more than 40 peer-reviewed publications, and she acts as Guest Editor in “Animals” (MDPI) and “Front. Bioeng. Biotechnol.” (Frontiers) journals. She is currently editing a book for the book series Methods in Molecular Biology, published by Springer Nature. 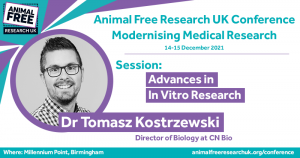 Dr Tomasz Kostrzewski is Director of Biology at CN Bio with more than 15 years of experience in molecular and cellular biology research.

Prior to joining CN Bio, he worked at Imperial College London in the Department of Life Sciences studying immune cell development and stem cell differentiation.

At Imperial College London he completed both an MRes and PhD in the department of Cell and Molecular Biology. He has significant experience in advanced (3D) mammalian cell culture, organ-organ crosstalk and immune cell regulation. Additionally, he has experience of working in biopharmaceutical drug discovery and development with GlaxoSmithKline. As Director of Biology at CN Bio, Tomasz is responsible for biological model development and collaborative research projects. Tomasz has published more than eight peer-reviewed scientific articles and patents in the last three years. 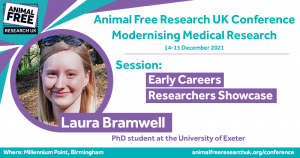 I graduated from the University of Reading with a BSc Biochemistry and an MRes Biomedical Research. During this time, my research was focused toward the problem of obesity and adipose tissue dysfunction.

After a brief stint as a lab technician and a researcher in the Adipocyte Biology group at Exeter, I joined Professor Lorna Harries’ lab, Team RNA, to study the mechanisms by which our cells “age”. During my PhD I am hoping to use drug repurposing, rational small molecule design and artificial intelligence to attempt to find new compounds that affect cellular senescence.

I am privileged to be the first student in Exeter’s Animal Free Research UK Animal Replacement Centre (ARC2.0). This funding is designed to give students an early career path rooted in research that doesn’t use any animals or animal-derived products. It enables me to find and showcase alternative animal-free ways of researching while producing better and kinder science. 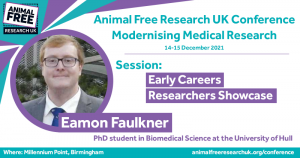 Eamon Connor Faulkner, is a PhD student at the University of Hull and a member of the Endothelial cell biology health GDP PhD cluster. 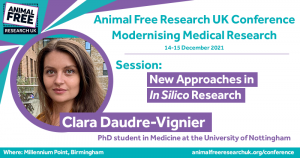 Clara Daudre-Vignier completed her MEng in General Engineering at the University of Warwick in 2019.

Clara is currently a 3rd year PhD student in Medicine at the University of Nottingham. Her PhD focuses on the computational modelling of human organs, using and further developing a high-fidelity, highly integrated computational simulation suite of the respiratory and cardiovascular systems to 1) better understand the pathophysiology of cardiac arrest and cardiopulmonary resuscitation (CPR), 2) develop more effective CPR strategies tailored to the subject and precipitating aetiology and 3) reduce the usage of animals in research. 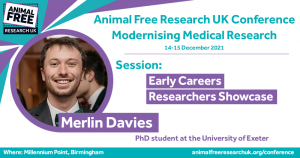 Merlin’s research currently concerns coronavirus as a PhD student. This includes linking viral load to COVID-19 severity, and further developing a test to determine whether presence of the virus in a patient is still infectious.

Merlin started as a lab technician during the pandemic which eventually became a full time PhD funded by Animal Free Research UK and a generous University of Exeter alumuna. This project has evolved to include determining any links between immunosenescence and disease severity.

Merlin studied BSc medical sciences at the University of Exeter, and is looking to embark on a career in novel molecular biology research, relating to ageing and infectious diseases whilst incorporating animal free techniques.