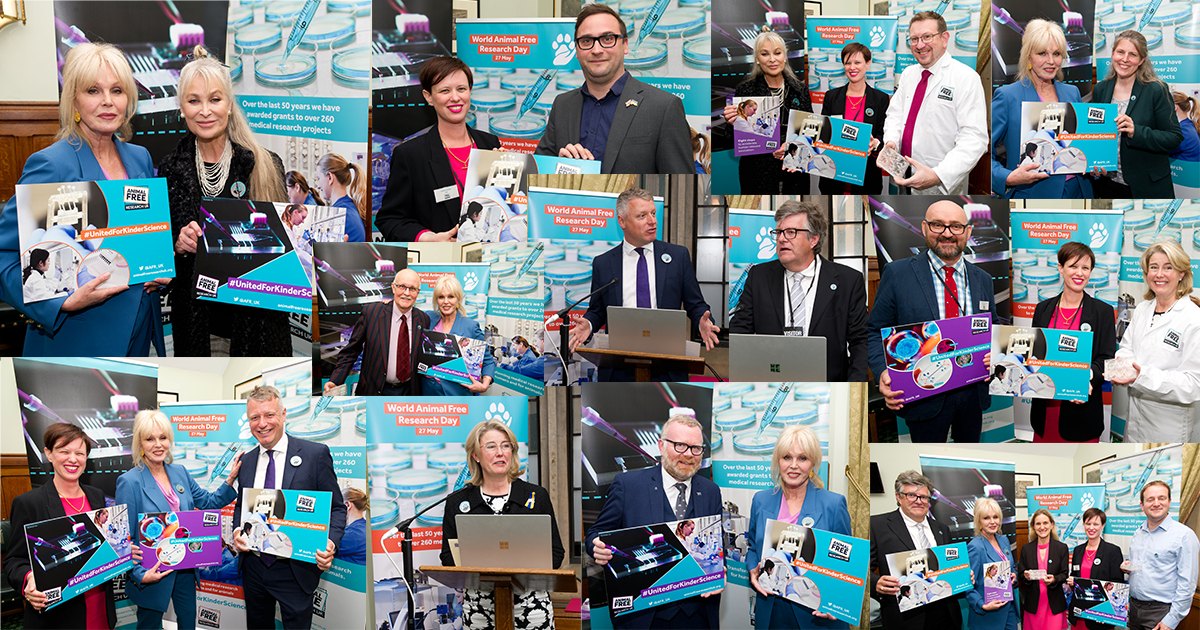 A week might be a long time in politics – though what is certain is one day in Parliament was a giant leap for human relevant science and Animal Free Research UK. 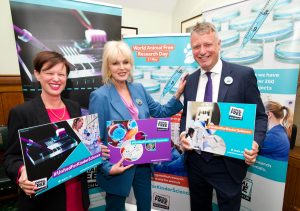 Thanks to Labour MP Luke Pollard, we were able to host an afternoon reception during which launched our Eight Steps to Accelerate Human Relevant Innovation – a manifesto that sets out how the UK can become a world leader in finding next generation treatments to improve the lives of patients faster, and all without animal suffering.

The event kicked off our May Awareness Week, which culminates today on World Animal Free Research Day.

Our star Patron, Dame Joanna Lumley gave a keynote speech endorsing the Eight Steps, and she implored the many MPs listening to lobby the Government to action all of them, including two key parts – to launch an inquiry into how the UK conducts medical research, and appoint a Minister to overhaul outdated policy. 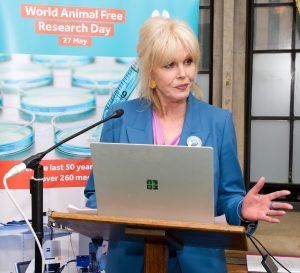 She had the ear of us all – including journalists, who helped spread far and wide our vision of our world in which human diseases are cured faster without animal suffering.

You can click here to read one of the many pieces.

Scores of MPs attended the reception and they too learned more about the ground-breaking New Approach Methods – the NAMS – the organs on a chip, artificial intelligence, human cells and tissue development, data from human patients, et al.

Some of the brilliant scientists we help fund, including Professor Mike Philpott and Dr Adrian Biddle from our Animal Replacement Centre of Excellence (ARC 1.0) at Queen Mary University, plus our own Science Director Dr Jarrod Bailey and Science Project Coordinator Niamh Haslett, were also there to help explain and share their passion.

Some of our trustees were there too to witness this special day in our history. 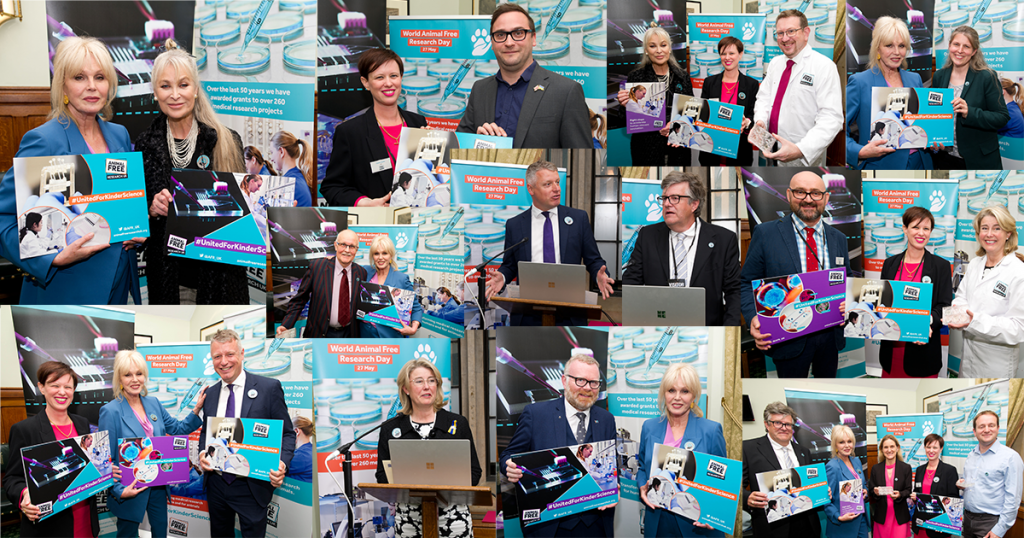 Some of the MP’s who attended the parliamentary reception

Why was this event so important and what does its immense success mean for us?

With 85% of deaths in high income countries like the UK due to diseases like heart disease, dementia and stroke, countless animals suffering in medical research, and most diseases still poorly understood and lacking adequate treatments, it has never been more urgent to accelerate human relevant research.

As I told this important audience of policy makers, this is a Medical Research Emergency.

That’s why we need government to overhaul the archaic rules that allow animal testing to continue.

Before we get the changes in the law, we need to change hearts and minds.

And the way to do that is to show and tell so as to foster understanding and gather support.

For years, Animal Free Research UK has, like other likeminded organisations including members of the Alliance for Human Relevant Science, been lobbying our lawmakers for change.  We have enjoyed some success.

But on Monday last, we believe we made significant cut through thanks to the scientific demonstrations and speeches, and thanks to the friendly, informative conversation during which we explained exactly what we do, how we do it and why.

The MPs who attended left filled with new knowledge, many tweeting their support for the acceleration of human relevant medical research, and why it is so important.

They left the room understanding how, despite huge investment into disease research and drug development, most diseases remain poorly understood and lack adequate treatments – in large part due to the continued reliance on animals as models for human illness. 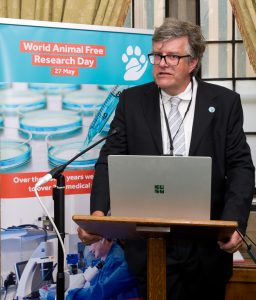 Importantly, they heard from Mike and Adrian and Niamh and Jarrod about how the game changing scientists we fund are forging a future where human diseases are cured faster without animal suffering.

I told the gathered policy makers and journalists how our Eight Steps to Accelerate Human Relevant Innovation sets out how the UK can become a world leader in finding next generation treatments to improve the lives of patients faster – and all without animal suffering.

I told them about professor of neuroscience, Amanda Ellison at Durham University who  researches how our brains work with our bodies to bring about our behaviours. With funding from us, Amanda helped to develop Transcranial Magnetic Stimulation, a technique which sends magnetic pulses into specific areas of the human brain, switching those areas on for a split second. By doing this, researchers can work out what each part of the brain does. It’s an example of cutting-edge research at its best and has replaced the use of monkeys who were previously commonly used in this type of research, causing them great suffering and brain damage. Game Changer.

I told them about Dr Nicola Jeffrey, a Postdoctoral Researcher at University of Exeter. We funded Nicky’s PhD and postdoctoral research into diabetes at our ARC 2.0. Using human cells instead of mice, she made a major diabetes discovery. Nicky found the gene responsible for changing insulin-producing beta cells into delta cells, which can cause diabetes. This mechanism only occurs in humans. It had been missed previously as cells in mice behave differently. By using human cells, Nicky was able to detect the gene responsible for this in humans, which will more likely translate into new treatments for humans. Game Changer.

I also described the work of our Dr Gehad Youssef, a Postdoctoral scientist at the University of Cambridge. He is developing machine learning to better understand the link between lung cancer and COVID-19 and identifying novel drug targets in cancer and inflammatory bowel disease.

Previously, Gehad worked with Professor Mike Philpott and Dr Adrian Biddle at ARC 1.0 where he used machine learning to increase our understanding of head and neck cancer. Approximately 90% of cancer-related deaths are associated with secondary tumours resulting from the spread of cancer cells throughout the body. This research is now helping to predict the spread of cancer through the human body, and all without using animals.

I told the MPs and media how all these examples demonstrate beyond all doubt, how human relevant science could be a game changer for all of us, and how our new manifesto sets out the first eight steps for the Government to take us there, to put humans – not animals – at the heart of medical research.

We believe we planted the seeds of change firmly in Parliament this week – in the hearts and minds of policymakers, who were given clear sight of our vision of a world where human diseases are cured faster without animal suffering.